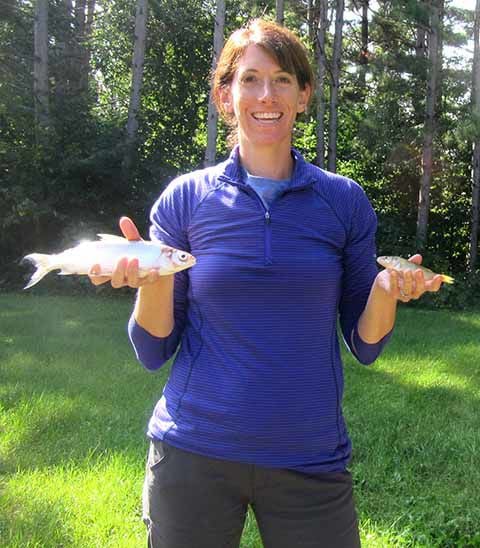 Fishing up some data

A cisco (genus Coregonus) also known as a lake herring. 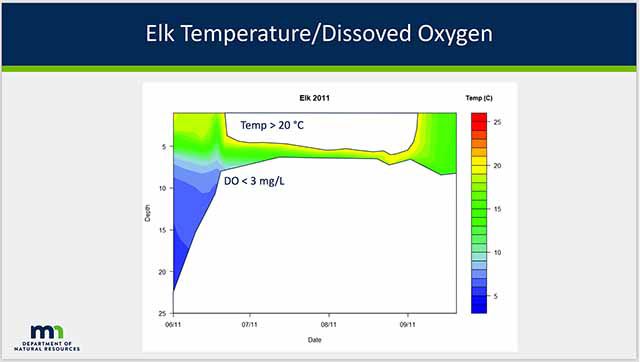 Fishing up some data

A cisco (genus Coregonus) also known as a lake herring.

When it comes to gathering data on local fisheries, the DNR’s methods span all sorts. That includes gillnets, creel surveys and, if you ask Beth Holbrook, hydroacoustic equipment. An alumna of Onamia High School, Holbrook works with DNR, helping to develop equipment, techniques and analysis for fisheries data across the state.

The development and use of hydroacoustics is one among several projects in which Holbrook is currently involved. Hydroacoustics, she explained, is a sound-based system suited for sampling coldwater pelagic forage fish. For the past several years, Holbrook has developed protocols, standard procedures and studies using hydroacoustic systems.

“It’s basically just a fancy fish finder,” Holbrook said. The hydroacoustic system will send a signal out that rebounds off anything with a different density than water. The hydroacoustic data collected is then compared with gillnet data to corroborate the findings.

Elaborating on the equipment’s depth range, Holbrook said that hydroacoustics sampled a conal area. As such, the sample area was small near the surface. Near the lake’s bottom, there was also an unreadable “dead zone.” Thus, the equipment was best suited for pelagic fish, those found in this middle range.

Holbrook’s studies have been done in conjunction with the Minnesota DNR’s Sentinel Lakes program, a long-term ecosystem monitoring program across 25 Minnesota lakes aiming to understand and develop management plans for stressors including climate change, land and lakeshore development and invasive species, according to the DNR’s website. The Sentinel Lakes that have seen hydroacoustic research include Greenwood, Trout, Elk, Ten Mile, and Carlos Lakes.

In addition to the Sentinel Lakes program, Holbrook has also been involved in hydroacoustic work on several other area lakes. Gulf and Pelican lakes, which Holbrook identified as two important walleye lakes of the Brainerd area, have been sites in such studies.

“Hydroacoustic equipment is best developed for sampling species like cisco,” Holbrook said. “They’re coldwater. There’s a lot of them. They’re forage, and they tend to be down deeper where they are more susceptible to being sampled by our equipment.” She further added that cisco data was important to the DNR because they were the most common cold water species in the state, as well as a common forage species for sport fish like walleye, pike, lake trout, and muskie. Due to lakeshore development and climate change, Holbrook said, two-thirds of lake’s are expected to lose cisco habitat.

Lakeshore development, she continued, led to more nutrients being poured into the lake. These nutrients trigger algae blooms that deplete lake oxygen, a process known as eutrophication. She pointed to Elk Lake in Itasca State Park to give an example of this process. Elk is relatively shallow with a fair amount of nutrients flowing in. Cisco prefers water at less than 20 degrees Celsius, so they will avoid Elk’s warmer surface waters, but as eutrophication progresses throughout the summer, the lake’s depths become hypoxic (or depleted of oxygen). By August and September, this can leave the fish sandwiched in a narrow band, with warm water above and hypoxic water below (see graph for a visual representation of this process). “They become particularly susceptible to a summer kill,” Holbrook said. “In warm summers, you can see a cisco die-off.”

From Onamia to Superior and beyond

Holbrook is a graduate of Onamia High School, class of 1996. She grew up in Onamia, as her parents were teachers at the school. Following graduation, she attended the College of St. Benedict. In 2000, she graduated with a major in natural science. She would later go onto to attend the University of Minnesota-Duluth to get her master’s in biology and then a Ph. D. in water resources science.

Her research throughout her educational career had involved hydroacoustics, setting the course for her current career. She had also spent some of her time in college studying the fisheries of Lake Superior, which contributed to her general interest in coldwater fisheries. “I grew up fishing,” she explained. “I liked boats. I liked being outside … but I think what really hooked me was being on the shores of Lake Superior, being involved with the fisheries out there. It’s a unique system–a challenging system–to study.”

Even today, Holbrook continues her work on Lake Superior, studying the commercial cisco fishery on the lake. She noted that Superior was unique for how long lived its cisco populations tended to be, allowing for longer data sets forecasting upcoming year classes. “There have not been as many good year classes for quite a few years now,” she said. Another challenge for Superior, she observed, that its management was spread across multiple states and Canada.

Looking at the Sentinel Lakes program in general, Holbrook noted that the program was approaching its tenth year of collecting data. “That’s really exciting,” she said, “because I feel that’s the minimum time to get a sense of the amount of variability in populations over time.” As the program moves forward, she felt the amount of data would now be able to more clearly show the trends happening across lakes.

Holbrook’s work is largely concerned with the gathering and analysis of data and as well as the implementation of technology. However, that data, whether it’s for the Sentinel Lakes programs or the fisheries of Lakes Superior, Gull and Pelican, portends the future of our lake ecosystems and what we can do to help them.