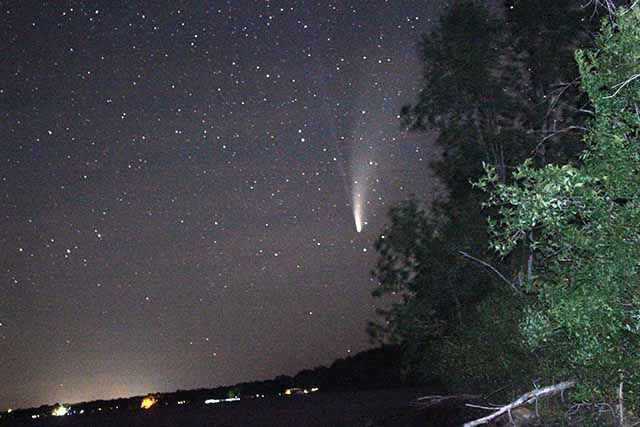 Once in a lifetime view of comet

The NEOWISE comet spotted over Mille Lacs Lake from Malmo. 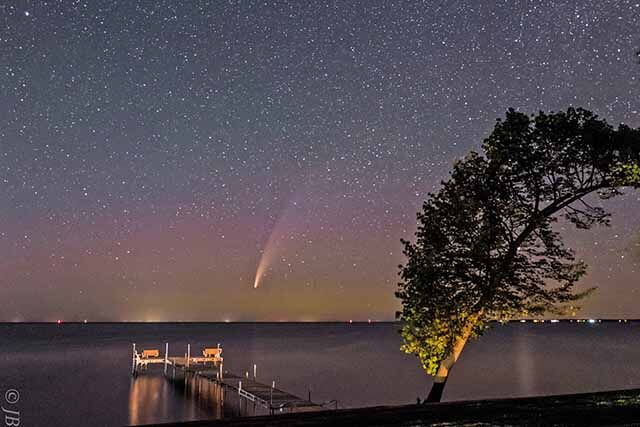 The NEOWISE Comet was photographed this weekend by Jeff Brown from Izaty’s Resort in Onamia. The comet will only be visible another couple days, and it won’t be visible again for an estimated 6,800 years.

Once in a lifetime view of comet

The NEOWISE comet spotted over Mille Lacs Lake from Malmo.

The NEOWISE Comet was photographed this weekend by Jeff Brown from Izaty’s Resort in Onamia. The comet will only be visible another couple days, and it won’t be visible again for an estimated 6,800 years.

This month, passengers of Spaceship Earth have gotten a special view out the stellar window, as recently discovered comet NEOWISE has shone brilliantly in the night sky. Those living on Mille Lacs should have been able to spot the comet hanging in the northwestern sky. Astronomical reports indicate that the comet will be visible between July 11 and July 23, varying slightly depending on location.

According to an article published July 8 on the NASA website, the comet was discovered on March 27, 2020, by NASA’s Near-Earth Object Wide-field Survey Explorer (or NEOWISE, to which the comet owes its name) space telescope. This spacecraft was launched in December of 2009 and is long past its projected seven-month lifetime. The article states that it will harmlessly re-enter the earth’s atmosphere in the near future.

The article indicates that the comet passed inside Mercury’s orbit on July 3, and this close approach to the sun resulted in the large tail of debris currently visible behind the comet. It passed by Earth at a distance of 64 million miles. Joseph Masiero, NEOWISE deputy principal investigator, is quoted stating the comet is approximately five kilometers across in size.

Another NASA article, “How to see NEOWISE,” indicates that the comet can be seen looking to the northwest sky after sunset, below the Big Dipper constellation, between July 15 and 23, the comet will shift along an arc, rising higher and closer to the Big Dipper. The article advises finding a place away from city lights and observing with binoculars or a small telescope. The comet should appear as a fuzzy star with a tail.

NASA indicates that once the comet disappears, it won’t be visible for another 6,800 years. Those out stargazing above Mille Lacs are in for a once in a lifetime opportunity this month.