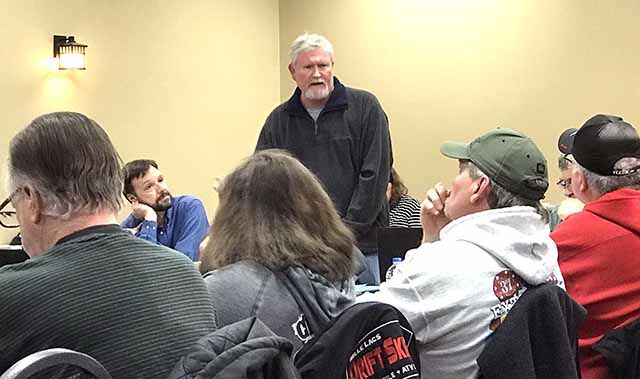 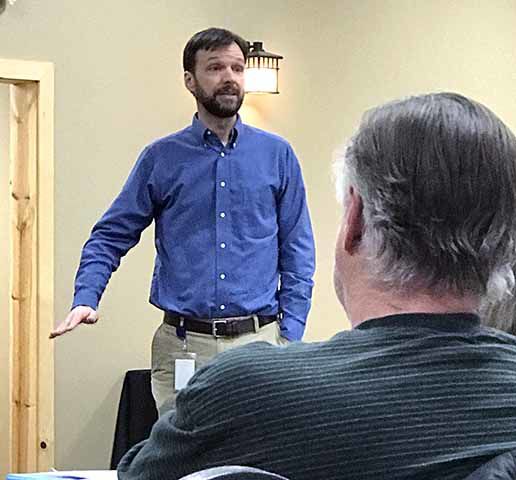 Brian Nerbonne, of the DNR fisheries, takes a poll of those attending as to whether they would prefer a planned shutdown of walleye fishing or a possible unplanned shutdown if deemed necessary by the DNR. 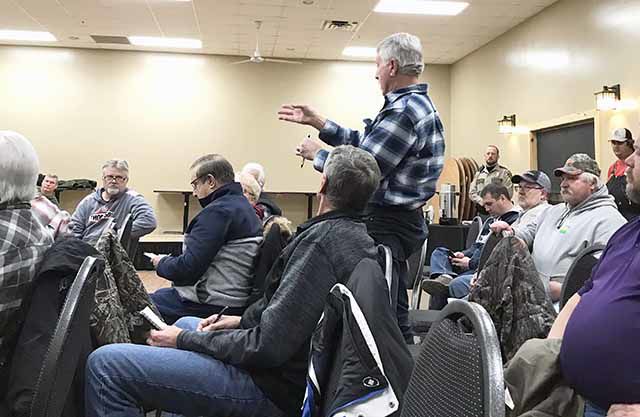 An audience member questions the DNR and MLFAC during the open forum portion of the meeting. 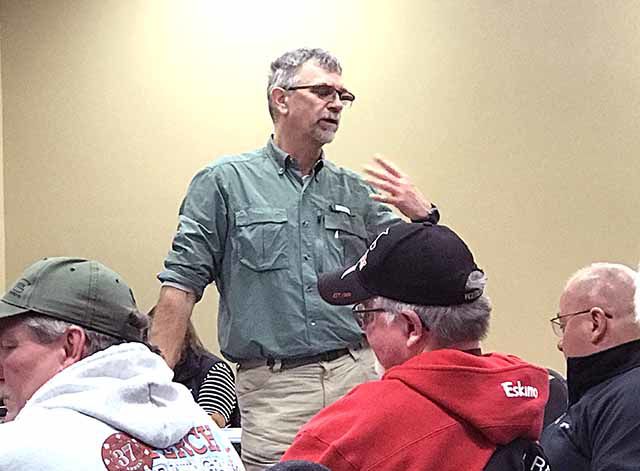 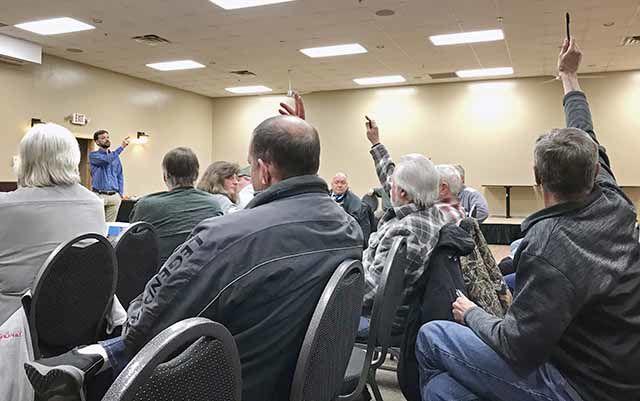 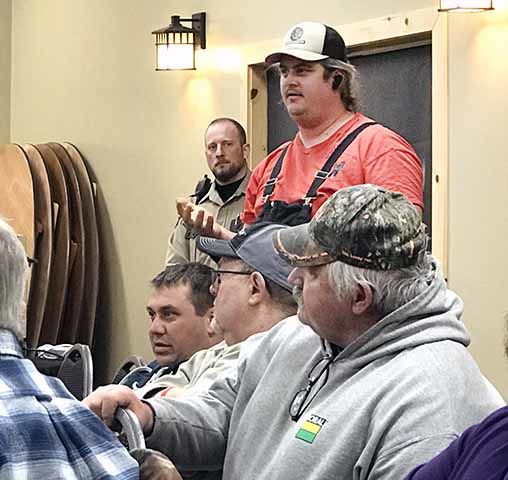 Brian Nerbonne, of the DNR fisheries, takes a poll of those attending as to whether they would prefer a planned shutdown of walleye fishing or a possible unplanned shutdown if deemed necessary by the DNR.

An audience member questions the DNR and MLFAC during the open forum portion of the meeting.

Topics included in the evening’s discussion were this season’s walleye harvest, the upcoming open water season, hooking mortality, the Minnesota 1837 Ceded Territory Fisheries Committee, and the best way to handle a possible closure on walleye fishing. But the main topic on everyone’s minds was what occurred at the 1837 Ceded Territory Fisheries Committee meeting in January.

Brad Parsons, fisheries section chief for the DNR, opened the meeting stating that the DNR is trying to have some stability going forward. He stated that the DNR advocated for a higher walleye harvest at the Minnesota 1837 Ceded Territory Fisheries Committee meeting on Jan. 22, sometimes referred to the “secret meeting” because only selected Tribal members and DNR officials are allowed to attend. At this meeting, the annual walleye harvest is determined which is to be split between the state anglers and tribal anglers.

During that meeting, the DNR proposed a total allowable limit of 168,000 pounds, which would be 18,200 pounds more than last year, and biologists from the eight Chippewa Bands proposed 104,000 total pounds.

“The Band’s (Mille Lacs Band of Ojibwe, along with the seven other Bands involved) citing the fact that the gill net catch rate dropped and that our modeling results showed a slight decline,” said Parsons. “We think the biomass will go down, and we’re comfortable with that risk coupled with the fish biting well and we have a shortage of forage. They were not as comfortable with that.”

In 2019, the Band stated that they used 45,651 pounds of their allowable 62,200 pounds of walleye. The state anglers used all of their 87,800 pounds and were subject to a shutdown of walleye fishing late last summer.

Minutes from the Jan. 22 meeting revealed that the State’s winter walleye harvest was approximately 7,200 pounds of walleye and was double the catch rate from the same time last year.

The DNR stated they do consider socioeconomic factors for the non-Band population, and decisions are not strictly biological.

When asked if it was possible for MLFAC members to be present at a Ceded Treaty Committee meeting, Brian Nerbonne, of the DNR fisheries, answered, “We’re going to give you more input, but at the same time, there is not going to be an opportunity to have direct representation at the meeting.”

The DNR stated their goals going into the Ceded Territories meeting as “maintaining a fishery that would allow participation through the entire season.” Depending on winter harvest, the DNR would like to offer the opportunity to allow harvest in May, and perhaps, in September and/or October.

The DNR was questioned about “why it seems like the DNR gives into the Band” when it comes to negotiations. The DNR responded stating that the decision is a joint one.

“The Bands might say that they are always asked to give into the State, as they have generally settled on a safe harvest level that is higher than they would prefer,” added Parsons.

MLFAC member Steve Johnson addressed the number of walleye in proportion to the amount of available forage. “The more spawning stock biomass (SSB, meaning all the reproducing fish) you have, the less forage, and if you do get the SSB down, it will build up the forage,” said Johnson.

The DNR responded saying they feel that the declining condition of the adult walleye suggests there may be more older walleye than the lake can support with the current amount of forage, hence the higher proposed total safe harvest. Alternatively, they said, the Band feels that more young fish will enter the fishery with more fish in the lake reproducing.

Bill Eno, MLFAC member, added, “One of the questions I get is about perch. I believe the six-inch perch have become forage. But now there’s just too many big fish that are predators to those sized perch, and that’s one of the reasons we don’t have enough forage. The further we get the lake out balance with all this management, the closer we’ll get to losing perch as a species. We’re ruining a big part of this lake.”

Parsons said, “I don’t disagree with you.”

“The Bands have indicated a desire to continue to grow the stock and feel that sustaining a higher SSB is important to achieve that goal,” said Parsons. “The Bands also did not feel that an increase in safe harvest allocation this year was warranted when both the gill net catch and modeled fish population were both lower than the previous year.”

However, MLFAC committee members challenged the accuracy of the gill net data given the heightened clarity of the lake and the fact that walleye prefer darker, cooler water. The gill nets have remained stationary for consistency in data. “We have long term data, and if we moved them (the nets), it wouldn’t have any link to the previous data,” said Nerbonne.

The DNR also reported that zebra mussels are at half the peak density they were in 2012 and that they will also be looking more intensely into available forage this summer.

Hooking mortality was once again brought up with one member stating that the difference estimated from the hooking mortality rate was enough to send the lake into a closure.

MLFAC member Tony Roach said hooking mortality rates are also counted in bass zones which are typically in shallow water at times when there is primarily lake pressure from bass anglers. He feels walleye caught by bass anglers typically don’t die. Another MLFAC member said they aren’t seeing dead fish on the shores and in water to indicate the hooking mortality rate is nearly as high as the DNR suggests.

Bill Eno added, “Can you tweak the system to account for this in hooking mortality? I think you should listen to some of these guys and make an adjustment so we can stay open all year. How do you have a murder if you don’t have a body? We lose, we lose, we lose.”

Dean Hanson, of MLFAC, said, “I’ve seen less dead fish in the last five years than in twenty-five years. I just don’t see the numbers. If I look at the fish I do pick up, they’re not walleye.”

Parsons responded saying that trolling in shallow water was factored into the hooking mortality concept.

The issue of a walleye fishing closure was brought up. Nerbonne said, “We want to talk about some options for the summer. One thing we’ve heard is that we want to keep the fishery open.” The crowd responded with a resounding, “Yes,” with one member adding that it was a “pretty low goal.” Nerbonne suggested the idea of a planned closure to make it easier for resorts taking bookings for the season and added that hooking mortality really climbs in July.

Nerbonne asked those present to raise their hand in response to whether or not they would prefer a planned closure or rather a possible unplanned closure at the end of the summer, similar to last year. After the hands were counted, he said, “The people in the audience are preferring a potential planned closure.” He added that July may be a good time for the planned closure.

Parsons said that the DNR’s goal is to have regulations released to the public by March 16.

At the conclusion of the meeting, Eno stated, “The State loses every single year. That’s what gets frustrating for everyone.”

DNR assistant commissioner Bob Meier responded, “I completely understand your frustration. We’re going by the science and the cards we’ve been dealt … we have the best people in the nation working on this issue.”

Eno added, “It’s going to require that you push a bit more. It’s only clear-cut because the DNR made an agreement on certain protocols. Shame on them if they knew what was going to be happening now. You have to step up for us and at least stop this shut down.”

Meier said, “We will be the strongest advocates we can possibly be.”