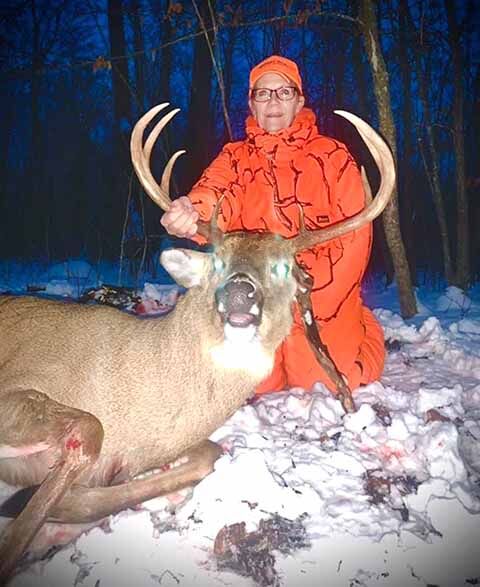 Biggest buck in the family!

Leah Johnson-Cutler, of Big Lake, shot this 8-point buck with a 20-inch rack in Isle at the Johnson property. This was the first season of many Johnson-Cutler has hunted without her father, Melvin Johnson. This was the largest buck the family has shot. The buck was shot with a Remington model 788, caliber .243. It was a 60 yd shot from a tree stand this Sunday around 4:30 p.m. 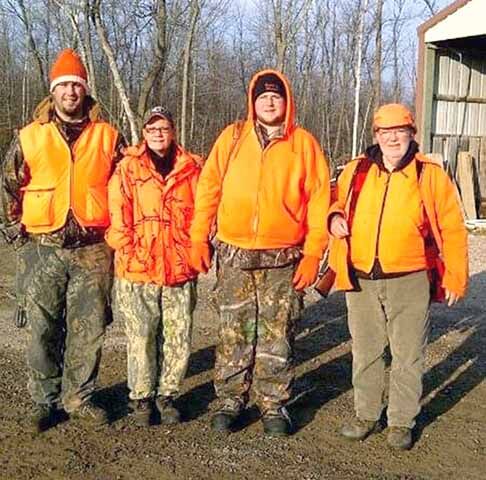 Biggest buck in the family!

Leah Johnson-Cutler, of Big Lake, shot this 8-point buck with a 20-inch rack in Isle at the Johnson property. This was the first season of many Johnson-Cutler has hunted without her father, Melvin Johnson. This was the largest buck the family has shot. The buck was shot with a Remington model 788, caliber .243. It was a 60 yd shot from a tree stand this Sunday around 4:30 p.m.

The first weekend of November saw the annual arrival of the fall deer hunting season around Mille Lacs, and that weekend brought with it warm weather. Local DNR officials and business owners have reported that hunting was slow these first few days, but many hunters have been out, due to both the weather and the ongoing pandemic circumstances. Additionally, snowfall in the week since has spurred deer activity and hunter success.

Speaking anecdotally on opener weekend, Lt. Robert Gorecki, Mille Lacs area enforcement supervisor with the Minnesota DNR, stated that this year’s opener weekend had seen an increase in the number of first time hunters as well as an overall increase in deer hunters for the firearm season. In part, he attributed this rise to the COVID-19 pandemic limiting other recreation options, leading to more people getting out hunting and enjoying natural resources.

Speaking on opener, Gorecki said that the weather was warm, which limited deer movement over the weekend. He noted that typically most deer are taken in the first few days of the season. However, the heavy snowfall that came in around Tuesday, Nov. 10 altered deer feeding patterns and led to an increase in deer movement. “We are seeing hunters who’ve continued to hunt through this colder, snowier weather have really good luck,” Gorecki said. “... I think if hunters remain patient and out in the field, they’ll find success.”

Gorecki also described the week since the opener as successful. “People have been quite successful,” he said, “and the bucks seem to be just getting into rut here, and they’re chasing does.” Overall, this activity had led to more nice deer being taken by hunters in the Mille Lacs area. In terms of male, antlered deer, Gorecki has seen healthy animals taken in. In particular, he cited a 12-pointer taken by a young, first time hunter. Deer he’s seen taken have ranged from yearlings to four- to five-years-old.

In terms of long term averages, Gorecki stated that the DNR was happy with where deer population numbers are currently at. “Obviously,” he added, “we are going to continue to monitor our harvest as well as deer population.” The main concern with regards to this population, he explained, was the winter severity index, which looks at factors including winter temperatures and snowfall. “Time will tell how severe this winter will be for us,” he said, “but as of now, our deer population is very healthy and strong.”

Gorecki concluded by reminding hunters and non-hunters alike to always wear blaze orange while out enjoying the natural resources during hunter season. “We don’t want people to be mistaken for game or an accident to happen,” he said. Additionally, he recommends orange collars or vests for pets, if possible, and for people to always tell others when they were headed outside, where they were going, and when they plan on being back.

Steve Piepgras, local wildlife supervisor with the DNR, stated that COVID restriction had prevented his office from getting out opener weekend to do car counts, so he was unable to provide observations on how hunter participation looked. However, like Gorecki, he said that local deer numbers looked good, with numerous deer being sighted during summer work. Over the first four days of the season, Piepgras said that harvest was slightly up in the Mille Lacs Wildlife Management Area. Including archery and early youth seasons, 80 deer had been harvested in the area, compared to 76 last year.

Lynwood Elliot, owner of the Malmo Market convenience store on the northeast corner of Mille Lacs, echoed much of what Gorecki had seen on opener weekend, noting the initial warmer weather and low deer movement. “There were a lot of people up,” Elliot said, “because the weather was so nice. When you get warm weather, the deer may not move a lot, but the people sure do. You get more man hours out in the woods.”

Elliot noted that his store has registered fewer deer in recent years, as most people now tend to do so via their phones. However, going off the store’s annual Big Buck hunting contest, he said that a number of nice bucks had been weighed in. “As far as that goes,” he said, “I think we are looking as good as any other year, maybe a little better.” Reflecting on the second week of the season, Lynwood said it also seemed like a good week, with a number of deer coming in. As of Monday, Nov. 16, 47 deer have been registered, and 277 hunters have signed up to participate. Elliot also noted that there were heavier deer than usual, with multiple over 200 pounds. Elliot listed off the current top six in the competition, which include Kerry H., at 222 pounds; Estin B., at 218 pounds; Justin O., at 206 pounds, Hunter N., at 206 pounds; Berkley B., at 197 pounds; and Chuck C., at 193 pounds.

The Malmo Big Buck contest currently has a total prize pool of $5,540, along with other donated prizes. The contest will run until the end of firearms deer season on Nov. 22.

“[Opener] might not have been typical good deer weather,” Elliot said, “but it was good people weather. I don’t mind having a couple of those years every once in a while.”