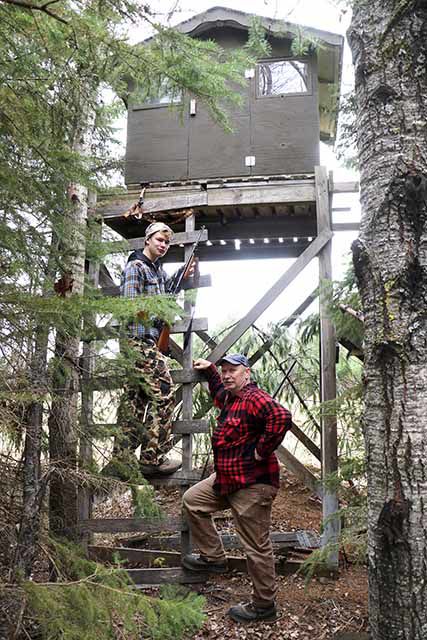 Joey and Brian Simonson stand beside a deer stand in the woods near where Brian grew up. 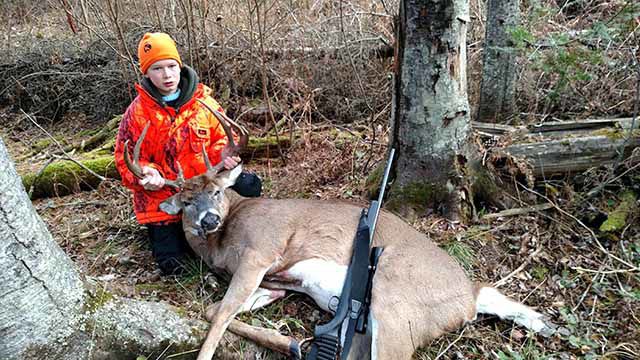 Joey Simonson poses with a buck, nicknamed “Mr. Elk,” which won him the Malmo Big Buck Contest in 2015.

Joey and Brian Simonson stand beside a deer stand in the woods near where Brian grew up.

Joey Simonson poses with a buck, nicknamed “Mr. Elk,” which won him the Malmo Big Buck Contest in 2015.

Local family shares their inter-generational story of a hunting tradition

For many in the rural communities surrounding Mille Lacs Lake, hunting is a tradition both annual and inter-generational. The arrival of fall once again sees many local families preparing to hunt. Brian Simonson’s clan is one such family. Part of a legacy dating back to the 1960s, Brian has brought his three sons up in the hunting tradition, and he and his son Joey both spoke on how they planned to continue those traditions this season.

Brian’s hunting career started 45 years ago, at the age of 12. Brian noted that it was a multi-generational family tradition, dating back to when his parents moved to the community northeast of Malmo in 1959. The family’s land became home base for a number of uncles coming up from the Twin Cities for deer hunting season. “My fate was sealed for better or worse when I woke up at age 4 to the puttering of my dad’s John Deere tractor pulling a large 10 pointer into the yard,” he said. Growing up, he spent many family reunions listening to the deer hunting stories told by his Grandpa Fred, as well as his dad and uncles. “[Our family] names all of our stands,” Brian said. “And there’s one called Grandpa Fred’s at a spot where he used to sit and wait for deer.”

And that family tradition has continued for Brian’s children. Brian said that though he likes to joke that rifle deer hunting season is the official start of the holidays at his house, it is more often than not the truth. Since the season starts three weekends before Thanksgiving, he and his three sons, Eddy, Zack and Joey, will center their November plans around deer season. Joey, the youngest, still lives at home. He’s been hunting since age 10, and this will be his eighth season.

When it comes to equipment, Brian said he sticks to the basics: a gun, a knife and a grunt call (which he said will attract a buck ready for a challenge, on rare occasion). Brian added that a cell phone is crucial for communication between hunters. At their hunting camp, there are also several doe decoys that had proven effective at drawing bucks.

The Simonsons primarily hunt the land near Dad’s Corner, at the intersection of Hwy. 65 and Aitkin County Road 2. They also hunt occasionally in Malmo Township, near their home. Explaining the family’s routine, Brian said they aim to get to their stands an hour before sunrise on the first weekend. A hunter walking to a stand is noisy and disruptive, Brian explained, so this early approach allows the woods to settle before daylight. With legal shooting beginning 30 minutes before sunrise, Brian prefers to be in his stand 30 minutes before that. Late morning, Brian, Joey and their hunting party return to cabin at their deer camp, and they will head out again three to four hours before sunset.

“Both of us will hunt long and hard the first couple of days and most of all three weekends during the rifle season,” Brian said. In the afternoons after school, Joey will get in weekday hunts, and Brian is able to get in morning and evening hunts throughout the entire season. All three of Brian’s sons participate in a large deer camp with up to 16 other hunters. Brian will sometimes prematurely come back to camp if he is needed for any reason. “I consider it an honor and also fun to help a fellow hunter find a deer they believe they’ve hit, for example,” Brian said.

Brian and Joey both held out for large bucks, a strategy that ensures some venison will make it to the freezer. They will also use their bonus tags to take a doe with either gun or bow, as their permit area allows for an extra tag antlerless deer. It is a pattern they have kept for the past ten years, when bonus tags are available.

Both Brian and Joey are active participants in “Big Buck” contests. Brian described the contest which runs through a gas station in Malmo as “all-consuming for many people in our camp.” Joey had previously won the contest four years ago, and he noted that he is very selective in the deer he takes, hoping to repeat his previous success.

Reflecting on how hunting is different now from back in his childhood, Brian recalled how much smaller the local deer herd used to be. In 1971, before he was old enough to hunt, the season had been canceled due to massive winter kills in the prior seasons. “That’s unimaginable in today’s world,” he said. “To see a buck of any size was extremely rare in my teen years.” He also suspected Joey had passed more young bucks in his past three years of hunting than he had seen during his first 15 years. This changed in the 1990s, he said, when the herd saw a large spike after several mild winters.

He also noted that more effort is put into building deer stands today. “In my youth, the stands were made out of a few scraps of lumber of questionable quality,” he said. He also remembers many times just climbing up a spruce tree when the branches allowed it. Nowadays, Brian uses between 14-16 portable ladder stands, five or six pop-up blinds and at least six enclosed towers with propane heating. The pair also has an eight by eight, enclosed, two-story cabin, and Brian noted that Joey has tentative plans to sleep in it the morning of opener. As part of his summertime hay harvest, Brian cultivates plots of alfalfa and clover near these towers, to help fatten local deer before winter.

The only difficulties Brian foresaw for the upcoming season had to do with the unpredictability of the weather. “Windy days make for very little deer movement,” he said, “and that’s bad.” He suspected the local deer population is about average this year. He noted regulation changes for a six-county region including Aitkin: no scent lures are allowed, in part of an effort to limit the spread of chronic wasting disease. While he had previously seen success creating mock scrapes with these lures, the new regulation would not be part of the Simonsons’ itinerary this year.

Brian considers the following the ideal qualities of a hunter: being able to appreciate and understand the amazing abilities of the animals they see; understanding that the tradition of hunting is about camaraderie, storytelling and communing with nature, not just killing deer; and not being overly proud of one’s guns. “Deer season isn’t about shooting a box of shells,” he added.

Joey described his father as his biggest influence when it comes to hunting, both as the person who got him started and the one who informed all his hunting strategies. “Hearing about the success he has had in previous years, really puts it into perspective for the success that I have had in my first seven years of hunting,” Joey added.

Brian considers hunting a lifestyle, whether it is planting food plots in the summer, placing trail cams in the woods during the fall, searching for antler sheds in the winter, or going on wildlife cruises down township roads at dusk. It’s a lifestyle he was raised in, and one he’s cultivated among his three sons. Brian had no intention of retiring. “Not until I’m physically unable to hunt,” he said.