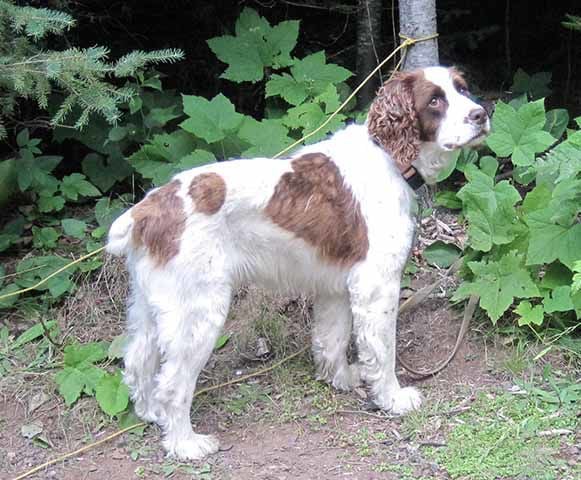 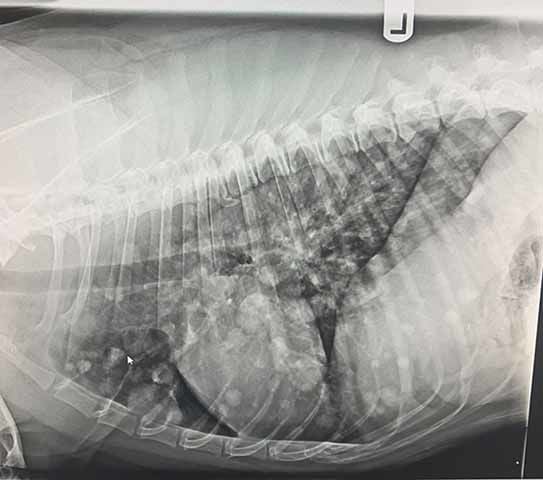 Blastomycosis, a disease caused by fungus commonly found in wet environments with decomposing matter such as leaves or wood, is on the rise locally and in the state. Below is an x-ray showing blastomycosis in a dog.

Blastomycosis, a disease caused by fungus commonly found in wet environments with decomposing matter such as leaves or wood, is on the rise locally and in the state. Below is an x-ray showing blastomycosis in a dog.

Local cases of deadly disease have doubled this year; pets and owners should take caution

Dogs may be man’s best friend, according to the old cliche, but both dog and man have a nemesis they should be aware of this season: blastomycosis. Blastomycosis is a fungal disease that commonly attacks the respiratory system of dogs and humans alike, and Dr. Katie Baratto, of the Garrison Animal Hospital, says the hospital has seen twice as many cases this year compared to years past. As the disease can prove fatal if untreated, Baratto lent her expertise to the Mille Lacs Messenger to help inform the public on the nature of this disease.

According to the Center for Disease Control and Prevention’s website, the blastomycosis infection results from the fungus blastomyces, commonly found in wet environments and decomposing matter such as leaves and wood. Baratto pointed to wet soil as a common source for the disease, adding that the infection occurs frequently among people and dogs who are “outside a lot and messing around in the dirt.” Examples included landscape workers, hunting dogs, or dogs who were regularly digging in local swamps. “It can happen to anyone,” she said, “but those [people or dogs] have a high danger potential.” As infection is caused by ingesting or inhaling the fungus spores, she added that length of exposure wasn’t necessarily a factor.

As for symptoms of the disease, Baratto said it is most frequently a respiratory infection, so signs include coughing, fever, lethargy, and decreased appetite. The infection can spread to other parts of the body, Baratto continued, allowing for symptoms like skin lesions or lameness if it spread to the bones. “It can be in the eye,” she said. “Technically it can go anywhere, but respiratory is by far the most common.”

The Center for Disease and Control has a similar list of symptoms for human infection, including fever, coughs, night sweats, muscle or joint pain, weight loss, chest pain, and fatigue. In severe cases, it could also spread throughout the whole of the human body. Symptoms occur within three weeks to three months of breathing in the fungal spores. Baratto noted that the disease would only spread in its spore state and is not transmissible from an infected animal after infection.

If people are concerned their pet is infected, Baratto advised getting the pet to a veterinarian as soon as possible. “The disease can move quickly,” she said, “and treatment is expensive.” Treating the disease can require six to nine months of antifungal medication. Baratto also cautioned that the disease is potentially fatal, even during the treatment process. “We do lose patients to it,” she said. “They can die … we’ve lost several this year during treatment.”

In a typical year season, Baratto said she might see two or three cases of blastomycosis in a year. This year, she has seen seven. While the Ripple River region just northeast of Mille Lacs has been a common site for the disease, Baratto said her cases came in from Pine River, Aitkin and Pillager. Baratto has heard reports from the veterinary clinic in Baxter that their numbers were also higher than normal. The cause for this year’s increased cases isn’t known, Baratto said, but the especially wet season has likely not helped.

Baratto also advised against panicking, as the infection is still uncommon despite the rise in case numbers. “It’s definitely a concern in our area right now,” she said. “We don’t need to panic, but it’s something to be aware of so you can catch it early. The earlier you catch it, the better chance you have of successful treatment.” She also noted that while people may be worried about their pets, the disease is contractible by humans as well. Monitoring human health is also important.

“People just need to be aware,” Baratto said. If people have concerns about the health of their pets, she said anyone is welcome to contact the Garrison Animal Hospital, which can be reached at (320) 692-4180. Blastomycosis may be uncommon, but a wet fall has seen the disease on the rise. With potentially deadly consequences, awareness is paramount.

Would you support requiring people to show proof of COVID-19 vaccination before entering public places?