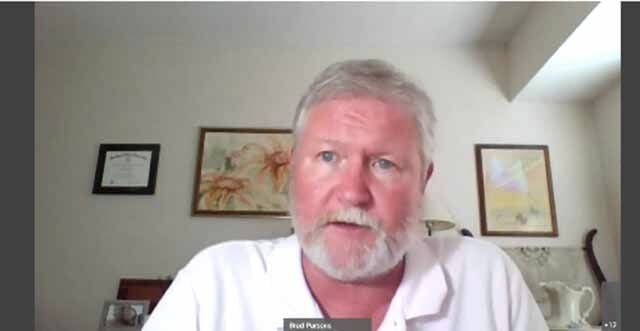 Brad Parsons, fisheries section chief for the DNR, addresses the MLFAC members along with other DNR officials at the Aug. 8 MLFAC meeting via WebEx. 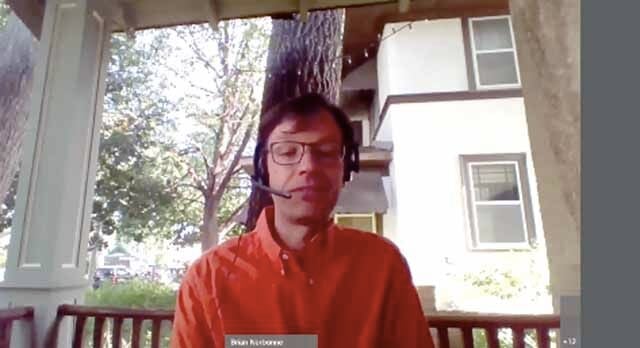 Brad Parsons, fisheries section chief for the DNR, addresses the MLFAC members along with other DNR officials at the Aug. 8 MLFAC meeting via WebEx.

The Mille Lacs Fisheries Advisory Committee met with the DNR for a web meeting, due to COVID-19 pandemic concerns, on Thursday, Aug. 8. Topics included a lake management plan discussion, update on creel surveys by Tom Heinrich, committee business and a public comment section.

Regional Fisheries Manager (Central Region) Brian Nerbonne said the DNR has a draft plan ready for next year, but because of COVID-19 restrictions, they haven’t been able to get tribal review of the plan. He added they are toying with the idea of a web-based public meeting to address lake issues.

Nerbonne said that they are in discussion with the Bands (Mille Lacs Band of Ojibwe, along with the seven other Bands involved) on the next plan that will replace the consensus agreement. “Discussions have been ongoing, and the latest thoughts are that we need to try to incorporate the goals of the fishery for the different parties into the discussion,” said Nerbonne. “This will help us to put numbers to what that means.”

Tina Chapman, of Chapman’s Mille Lacs Resort & Guide Service, agreed and said it would be difficult to do a management plan without knowing what the Bands’ goals are. Steve Johnson, of Johnson’s Portside, concurred adding, “It’s unacceptable when one side gets to hold the cards against their chest, and you have to lay all yours on the table.”

Fishing guide Tom Neustrom asked Nerbonne how he felt about the lake’s forage situation and noted that there appears to be too many fish in the lake.

“We see the condition of the fish going down, and the yellow perch in the nets decreasing,” said Nerbonne. “So there is a concern about that. I don’t disagree with anything you just said, Tom. We are also concerned about that.”

Questions posed by DNR to committee

Nerbonne presented several questions to the committee. The first question posed was “What should the DNR state as their goals for the fishery?” He said, “We should be realistic and say that we have a shared fishery, and we can’t dramatically expand or say that we won’t increase [the quota].”

Some of the suggestions from the committee were to eliminate the closures, have more stability from year to year, have a five-year plan without “knee jerk” reactions unless the lake is in peril, have no live bait ban, reduce the number of fish because they “are skinny,” allow a better winter harvest, and allow the State anglers to be able to take some of the smaller fish like the Band gets to do.

The issue of having a pound (of walleye) system over a number (of walleye) system was brought up. “We need to take some of the bigger fish out, but when locked into a quota system, the poundage constantly affects how you can manage the lake. The pound system has never worked,” said Dean Hanson, owner of Agate Bay Resort.

Johnson asked that the DNR consider economic factors when setting goals. “The economic impact has to be up there. This economy was created by the lake and harvest from this lake and needs to be preserved, unless it is damaging the lake.”

Neustrom added, “It’s a feeling of frustration as anglers and resort owners; we know what’s in the lake.”

The issue of spawning stock biomass (SSB, the combined weight of all individuals in a fish stock that are capable of reproducing), and the overabundance of it in Mille Lacs, was brought up. “Red Lake has a 600 count [of SSB] per acre, and we have something like 15,000. Those fry (the stage when fish are capable of feeding themselves) are eating something, and that has to be addressed. You never stock lakes to that amount,” noted Johnson. Nerbonne agreed.

Nerbonne brought up the idea of switching to a harvest tag lottery system. “We could do a system where we have a harvest tag where people are put in a lottery and harvest that fish in that slot,” said Nerbonne. “We could target them where we want to target them, and we would know what the potential harvest is based on those tags.” Hanson said he liked that idea and that it’s a step in the right direction.

Chapman added, “I agree and think there should be consideration on how it plays in with launches and property owners and guides and how it’s distributed.”

DNR Mille Lacs Area Fisheries Supervisor Tom Heinrich reported that based on his creel survey reports, he estimates about 500 fish killed totaling about 1,600 pounds which puts them at 67% of the allocation. “The closure did work to preserve the number of fish that can be caught. I am optimistic that we can continue with the season,” said Heinrich.

State Representative Sondra Erickson (R-Dist. 15A) took part in the public comment segment of the meeting. She said that what she is hearing from constituents is that people are wanting a change and that they feel the DNR does not stand up for the state anglers when they are in negotiation with the Bands. She also petitioned the DNR to allow two MLFAC members to be part of the meeting with tribal members. “The experts that live and work near the lake, property owners, resort owners, anglers, or guides need to be involved,” said Erickson. “... it sounds odd to call it a co-management when the people who are actually affected are not involved.”

Brad Parsons, fisheries section chief for the DNR, responded stating that the heads of the Senate and House policy and fiscal committee heads are invited to the meetings but that he would consider Erickson’s feedback.

“I recognize that the July closure was less than ideal, but it did what we hoped it would … I’m very optimistic that we will have fishing in September and October,” said Parsons. “In May, we had 40,000 more hours of pressure than last year, and that was with just catch-and-release. People are still on the lake; they’re still catching fish, and they’re having fun.”

He added that angling pressure is up all around the state and that the Canadian border closure may have helped some Minnesota businesses.

Johnson asked how Parsons would rate the lake, “poor, fair, good or excellent?”

Parsons responded, “I don’t think the lake is in a crisis right now, but because the lake can crank out so many fish for so many people ... I wouldn’t even come close to calling the lake in crisis. In general, it’s in good shape. Fortunately, we are not in the same situation as we were from 2009 to 2012 where we had very little recruitment. Huge improvement from where we were.”

The tribes will never sit down with a bunch of resort owners and negotiate for less than what they have now. The tribes only negotiate on a gov't-to-gov't basis, not with a group who's obsessed with curtailing indigenous harvests so their cash registers can go ka-ching. It's too obvious MLFAC wants the tribes to stop springtime harvesting and take a lesser share of the resource. Not happening.