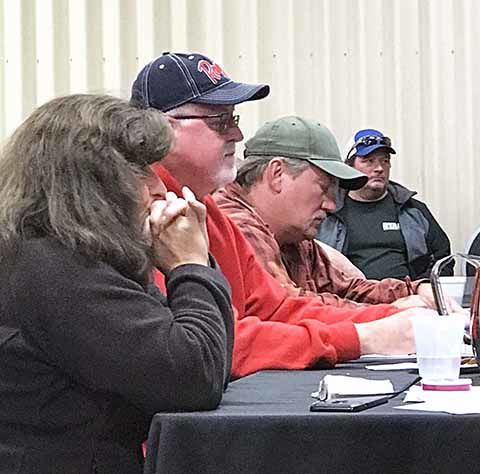 Members of MLFAC frustrated with the current practices by the DNR in negotiating the allowable walleye limit (quota) for non-Band members. 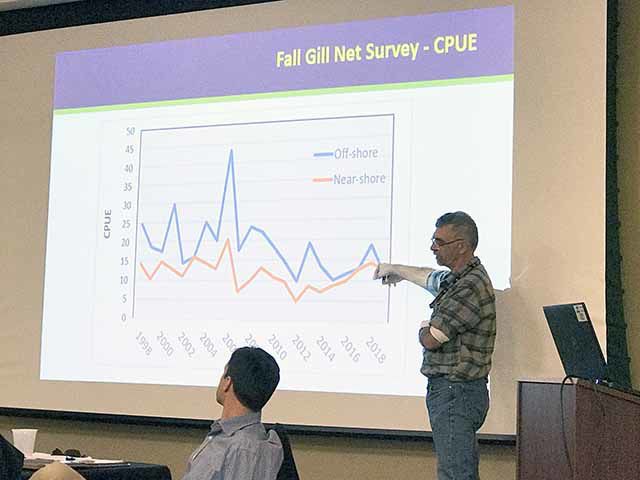 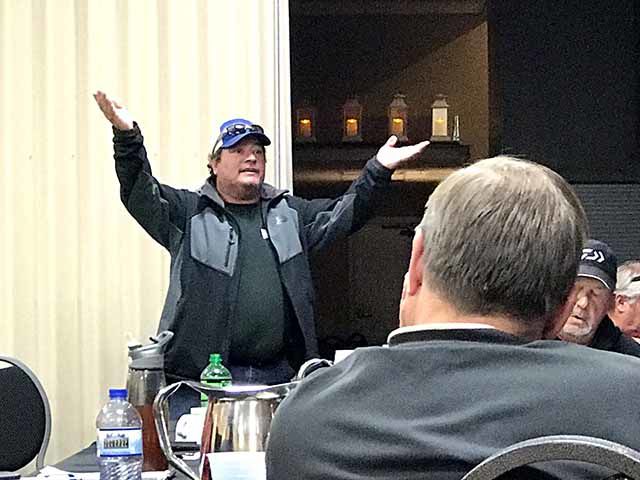 Member of audience opens up on DNR during public comment expressing his displeasure with walleye fishing regulations.

Members of MLFAC frustrated with the current practices by the DNR in negotiating the allowable walleye limit (quota) for non-Band members.

Member of audience opens up on DNR during public comment expressing his displeasure with walleye fishing regulations.

The Mille Lacs Fisheries Advisory Committee (MLFAC) met Oct. 14 at Appeldoorn’s Sunset Bay Resort to hear from the Department of Natural Resource (DNR) regarding their lake management planning process and to review the results of the summer online survey conducted by the DNR.

Some of the perhaps more interesting statements made by DNR Mille Lacs Area Fisheries Supervisor Tom Heinrich, who helped facilitate the meeting, were that the “walleye anglers who are harvest-oriented aren’t coming” and that the “abundance of walleye is not in crisis.”

“There’s walleye out there,” he added. He also stated that it’s “pretty important for people to harvest a walleye,” according to the online survey.

The DNR laid out their goals for the Mille Lacs fishery: 1) Serve all Minnesotans (fulfill Treaty obligations and improve public engagement), 2) Provide a consistent management process (improve stakeholder understanding of goals and trade-offs for regulation options and provide predictable regulations based on fish stock status to minimize the risk of unplanned fishing opportunity closure), and 3) Maintain healthy, self-sustaining populations that support recreation and harvest.

As for the first goal of communicating better with the public, discussion was held about what that would look like. Heinrich asked, “How else can we get our message out and the why about what we’re doing?” He added that there “are a lot of people who are kind of mad at us, but when we sit down and explain things, they kind of understand. We don’t like to work in a hostile environment anymore than anyone else does. Every spring, we could have an open invitation type meeting. We should move toward listening better.”

One MLFAC member, Tom Neustrom, responded asking, “Do you feel like the stakeholders don’t understand after four years?”

Heinrich responded, “Definitely, some of them don’t understand how the process works. Some people say we should go back to the Supreme Court.”

Another committee member, Dean Hanson, said, “I do believe many people don’t understand. There is a huge amount of misinformation out there. If you had a forum … I think it would be beneficial.”

Committee member Bill Eno criticized, “You people don’t understand. You have half truths. You’re implementing something you’ve been told to implement.”

Heinrich said that the off-shore nets have come down a bit, and near-shore nets are pretty similar to last year. “This shows our gill nets are actually giving us a pretty good idea of where the fish are,” he added. “What gives us confidence that the gill nets are indexing the walleye population correctly is the strong relationship between fall gill net catches and the population estimates we have completed.”

Committee member Steve Johnson retorted, “Except the one year that’s an anomaly,” using the DNR wording for the year the gill netting numbers showed an unusual spike in 2006.

Heinrich defended their system of determining walleye population, stating, “We’re using some standard techniques to assess the fish population, and it looks like now we have a good assessment. Look at the two sets of data and compare them.”

According to the DNR’s fall gill net survey preliminary results, the walleye population has dropped since 2018 from approximately 18 fish per net (both off-shore and near-shore) to around 12 fish per net in 2019. Their records show a peak in 2006, which the DNR called an anomaly, of approximately 44 fish per net.

Committee members questioned the DNR on the accuracy of the gill net numbers given that the nets haven’t been moved in years, and the lake clarity has increased with walleye tending to seek darker, murky water.

The DNR response was that if the nets were moved it would skew their accumulated data over the years. “The nets are designed to index the population. We could certainly catch more fish, by chasing them, but that would not give us an accurate portrayal of how the population is changing as a whole,” Heinrich added.

Committee member Tony Roach questioned the accuracy of the results when gill netting is done in September rather than October. “It’s interesting how much the water temp was climbing when the nets were out. It wasn’t a good time to be out fishing in the shallows. Maybe there needs to be another fresh look into the fall assessment as to the health of the walleye. I don’t see a good snapshot until Oct. 1. I’m seeing a big uptick and wider range of year classes showing up, and this seems to be a trend.”

Hanson stated, “How can you tell us the lake has changed dramatically, but you are still going to do things the same as you have for twenty years?”

Tony Roach said, “You’re saying your lifts (gill netting numbers) are gospel, and then we’re getting closed down. Everything I hear from every other angler is, ‘I can’t believe all the walleye I’ve caught.’ How can all these people be wrong?”

Heinrich attributed the high catch rate to the lake providing less forage this summer for the fish to feed on.

Hanson said they would like to be involved with discussions in what some call the “secret agreement,” referring to the closed consensus agreement meeting between the DNR and The Mille Lacs Band of Ojibwe and Fond du Lac Band, along with the Great Lakes Indian Fish & Wildlife Commission (GLIFWC) who represents the six Wisconsin Bands (Bad River, Lac Courte Oreilles, Lac du Flambeau, Mole Lake - Sokaogon, Red Cliff, and St. Croix Bands). “I feel like if we’re not going to have a say, then what are we doing here … why am I wasting my time?” he asked.

Hanson added concerns about being heard by the DNR, “There is nothing that impacts us more than your fall gill netting. I feel like I don’t have any input, and DNR doesn’t listen. I don’t think some of the recommendations we have made are being addressed. We don’t talk about the issues that really affect us. This is not what we were promised when we started.”

Kelly Wilder, DNR policy and planning fish and wildlife consultant, responded, “This is really good feedback for us,” adding the constraints they are under give them very little options.

Solutions to make agreement fair to both anglers and Band

In concluding statements by committee members, Johnson said, “The quota darn well better be higher this year.” He added that as a possible solution, the state could pay for the remainder of the Band’s unused harvest should the Band not use all of their quota as they have in the past.

Hanson added, “If they haven’t utilized that resource, let’s do something with it.”

Johnson said that if the lake gets back to normal, which he stated he believes it’s at, they could be looking at a 400,000 pound total harvest with approximately 225,000 pounds going to non-Band anglers. “At best conditions, you might be able to give people one fish, but you’re never going to get back to normal unless someone does some compromising and negotiating and two sides are talking. Right now you agree to whatever the other side tells you to do,” said Johnson speaking to the DNR officials present.

“We have half a million pounds and we’re afraid to give people one fish,” he added.

Committee member Dean Hanson also questioned the DNR’s agreement with the Band in regards to numbers, “You made bad agreements and decisions on the harvest.”

Johnson suggested the DNR officials take some of the ideas presented during the meetings to their leadership. “You guys can’t make the decision, I understand, but pass them up the line,” he said.

Wilder assured the group that important issues were sent “up the chain to the commissioner’s office.”

Public comments were allowed at the end of the meeting. One attendee stated, “I’m curious when the DNR is going to look out for me and our heritage. Federally, you’re violating the discrimination laws of this country. Different laws for different colored people.”

Another attendee remarked, “You’re not involving anyone, including MLFAC, in the decisions. Resorts are for sale. These guys can’t even go to the bank because they can’t give them a business plan. If you give people two fish for the next five years, it’s not going to hurt anything.”

The next MLFAC meeting, which will be focused on winter regulations, will be held on Thursday, Nov. 7 at Izatys Resort (40005 85th Ave., Onamia). While meetings are open to the public and allow for public comment at the end of the meeting, they are primarily intended for conducting committee business.