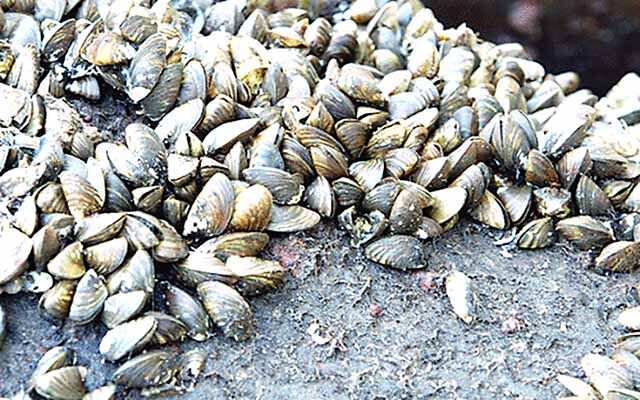 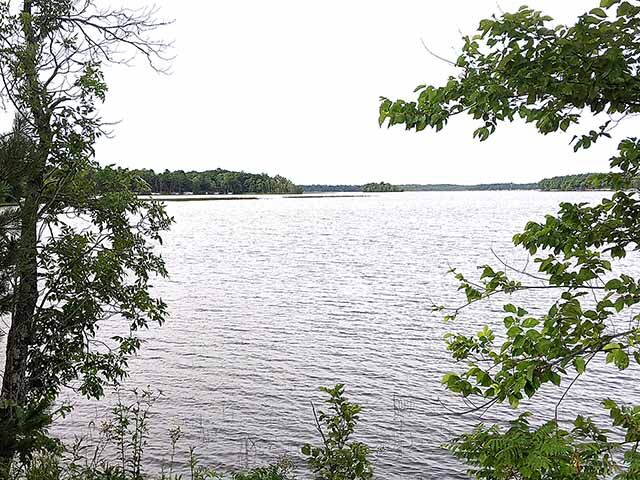 Farm Island Lake is a water body of 2,003 acres and is located eight miles south of the city of Aitkin. There is a confirmed presence of zebra mussels in the lake.

Farm Island Lake is a water body of 2,003 acres and is located eight miles south of the city of Aitkin. There is a confirmed presence of zebra mussels in the lake.

For the Aitkin County Aquatic Invasive

One active lake association works diligently to keep its members and all lake residents informed about aquatic invasive species (AIS).

A lake property owner fishing on the lake contacted the DNR after finding an adult zebra mussel on vegetation attached to a boat anchor. The DNR sampled the vegetation and collected a plankton sample, which revealed a zebra mussel larva, or veliger. Veligers may indicate a reproducing population of zebra mussels.

“In 2018 and 2019 snorkel and wading searches, veliger sampling multiple times per year and fall dock searches were completed,” said Tim Plude, DNR invasive species specialist. “In 2020, veliger sampling occurred after the DNR received a report of an adult mussel being recovered by a landowner out fishing on the lake. The county and lake association also collected veliger samples during these years, as well as landowners and dock companies being aware and looking out for mussels.”

Cheryl McDonough, board member of FILA added, “When Tim Plude came to inspect individual property for zebra mussels, people were anxious to hear the results and took an active, cooperative interest.”

She said, of 371 property owners on the lake, 234 are members of FILA – 63% of the lake property owners. McDonough said the association works closely with the DNR, and Aitkin County Soil and Water Conservation District.

“Even if they are not a paid member, they still receive our newsletters,” McDonough said. “We have an email network of 467 addresses so we are reaching a lot of people.”

FILA’s newsletters contain information about AIS “to inspire preventative action,” according to McDonough. FILA also has this information on its website, FarmIslandLake.org. It tells people how to identify zebra mussels and where they are likely to be found.

“The website has a whole page dedicated to AIS,” said McDonough, “which has a few videos and articles on how to stop the spread of invasive species and points to other websites with [additional] information.”

The mussel’s reproductive cycle is one key to its rapid spread and high abundance. Egg production starts when water temperature warms to about 54 degrees F. A fully mature female mussel may produce several hundred thousand eggs per season.

Eggs are fertilized outside the mussel’s body and within a few days develop into free-swimming larvae called veligers. Nearly invisible to an unaided eye, veligers remain suspended in the water for three to four weeks, drifting with the currents. If they don’t settle onto firm objects, they die, and in fact, most do. Those that find a hard surface quickly attach themselves and transform into the typical, D-shape, double-shelled mussel. Generally, zebra mussels grow roughly a little more than two-fifths of an inch per month. Within a year, a zebra mussel can grow up to an inch and become sexually mature. Mussels may live four to six years.

Zebra mussels can compete with native species for food and habitat, cut the feet of swimmers, reduce the performance of boat motors, and cause expensive damage to water intake pipes.

Any hard surfaces can be colonized by zebra mussels – rock, metal, wood, vinyl, glass, rubber, fiberglass, paper, plants, and other mussels. Zebra mussels also colonize soft bottoms. Hard objects, such as pieces of native mussel shells and even dead zebra mussel shells, act as a base for settling veligers allowing them to gain footholds even on sandy or muddy bottoms. As a few mussels begin to grow, they form barnacle-like colonies and in this way can form extensive mats of zebra mussel carpets on lake and river bottoms.

Zebra mussels were first discovered in the Great Lakes in 1988. At the end of the 1992 season, zebra mussels were found in isolated pockets from Minneapolis to St. Louis. Today, they have spread overland to hundreds of inland lakes in 28 states.

“Anyone visiting the lake should do their best to prevent the spread of this zebra mussel infestation and stop other aquatic invasive species from entering Farm Island and every lake in the state,” noted Plude.

Whether or not a lake is listed as infested, Minnesota law requires boaters and anglers to:

• Drain all water by removing drain plugs and keeping them out during transport.

• Dispose of unwanted bait in the trash.

• Dry all water related equipment such as docks, boat lifts and swim rafts for 21 days before moving the equipment to another water body.

Boat inspections are done by the DNR and Aitkin County at the Farm Island Lake public access on weekends spring through fall.

“My hope is that we don’t have a major infestation,” said McDonough. “Zebra mussels are not the only threat to the lake, so we continue to take the preventative actions to stop the spread of invasive species.”

People should contact an area DNR aquatic invasive species specialist if they think they have found zebra mussels or any other invasive species that has not already been confirmed in a lake.