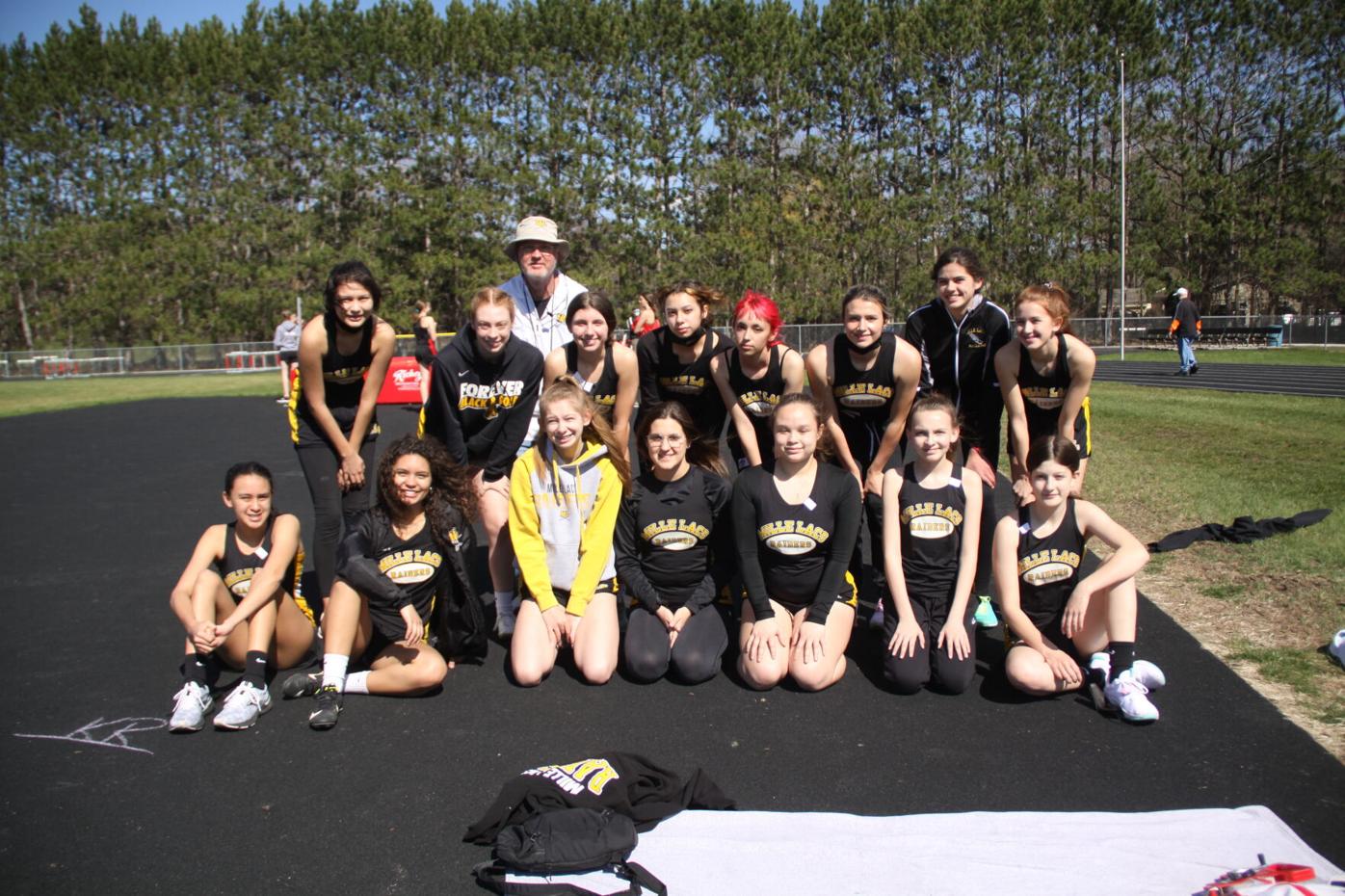 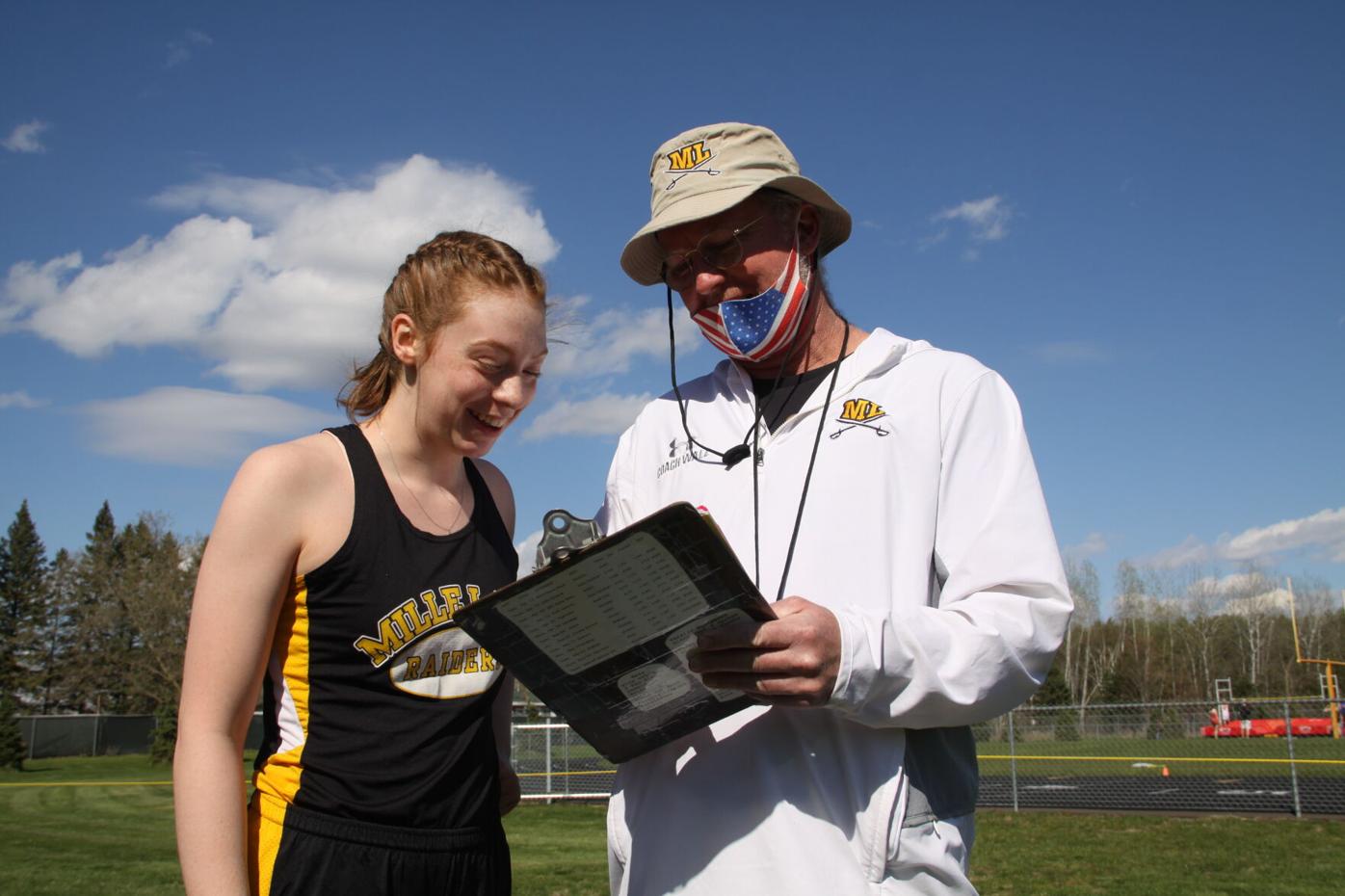 Somehow, when Mille Lacs Raider girls track coach Jeff Walz has, over the years, put out the all-call for athletes to take part in his spring sport, the numbers and quality of those who’ve answered have been good enough to field many competitive teams. Many of Walz’s teams, athletes from Isle and Onamia on the paired Raider squad, have finished either first or second in the Great River Conference year-in and year-out. This season, for various reasons, only 10 athletes grades 10-12, and only two from Isle High, turned out for the sport during the 2021 campaign. “Ten athletes make it impossible to fill all of the 18 events in a track meet,” Walz said. “But, I will say this. Every one of these girls is a quality athlete, they score points in every event they participate in and we are getting the most out of what we have.” By “getting the most” Walz can turn to the results during the first meets of the season. The Raiders beat second-place Rush City 106-97 in their first outing at East Central and in their third meet this spring, again at East Central, Mille Lacs beat Aitkin by one point. It took a total team effort in those wins,” Walz said. “Every point by every athlete became important.”

By early May, the Raiders had won two meets, finished runner-up in three meets and third in two. According to the coach, the reason for the team’s success so far lies the fact that they are performing well in the field events. Typically, the Raiders have had two or three athletes score points in each of those field events. “We have scored 70 percent of our points in the field events, including our strongest ones such as the triple jump, high jump and pole vault” Walz claimed. In the pole vault, Aiyanna Mitchell and Svea Carlson have finished 1, 2 all through the year to date. The triple jump has Kailee Barnett, Carson and Mitchell in every meet and the high jump has gotten lots of points from Katie Rocholl, Carlson and Barnett.

And the pleasant surprise so far for the team has been the performance tuned in by Emma Haggberg and Abby Biniek who have scored valuable points here-to-fore missing from most meets.

The Raiders have also enjoyed success on the track especially from Molly Saboo who has dominated most meets in the 800m, 1600m and 3200m runs, Rocholl and Mitchell doing well in the hurdles and Mille Lacs has picked up important points in the relays and sprints with the likes of Emerson, Nevaeh Merrill, Ashley Rogers and Emma Barnett.

“The girls on this years team have not only given their all, but they have even jumped into the Mille Lacs record books,” Walz said. For example,  Rocholl, with a time of 17.63 is now fifth all time in the 100m hurdles, Carlson has gotten into the book three times: with a vault of 8’9,” she is now third in the pole vault, and is also 6th place in both the triple jump and high jump. Saboo is fourth all-time in the 1600m run with a time of 5:34, 10th in the 800m run at 2:34 and 6th in the 3200m race with a time of 12:46. And Mitchell in 9th overall in the triple jump with a leap of 31’4.5.” “After missing the track season last spring, this years Raiders have bounced back nicely thanks to a veteran group who were eager to get back on the track,” said Walz.