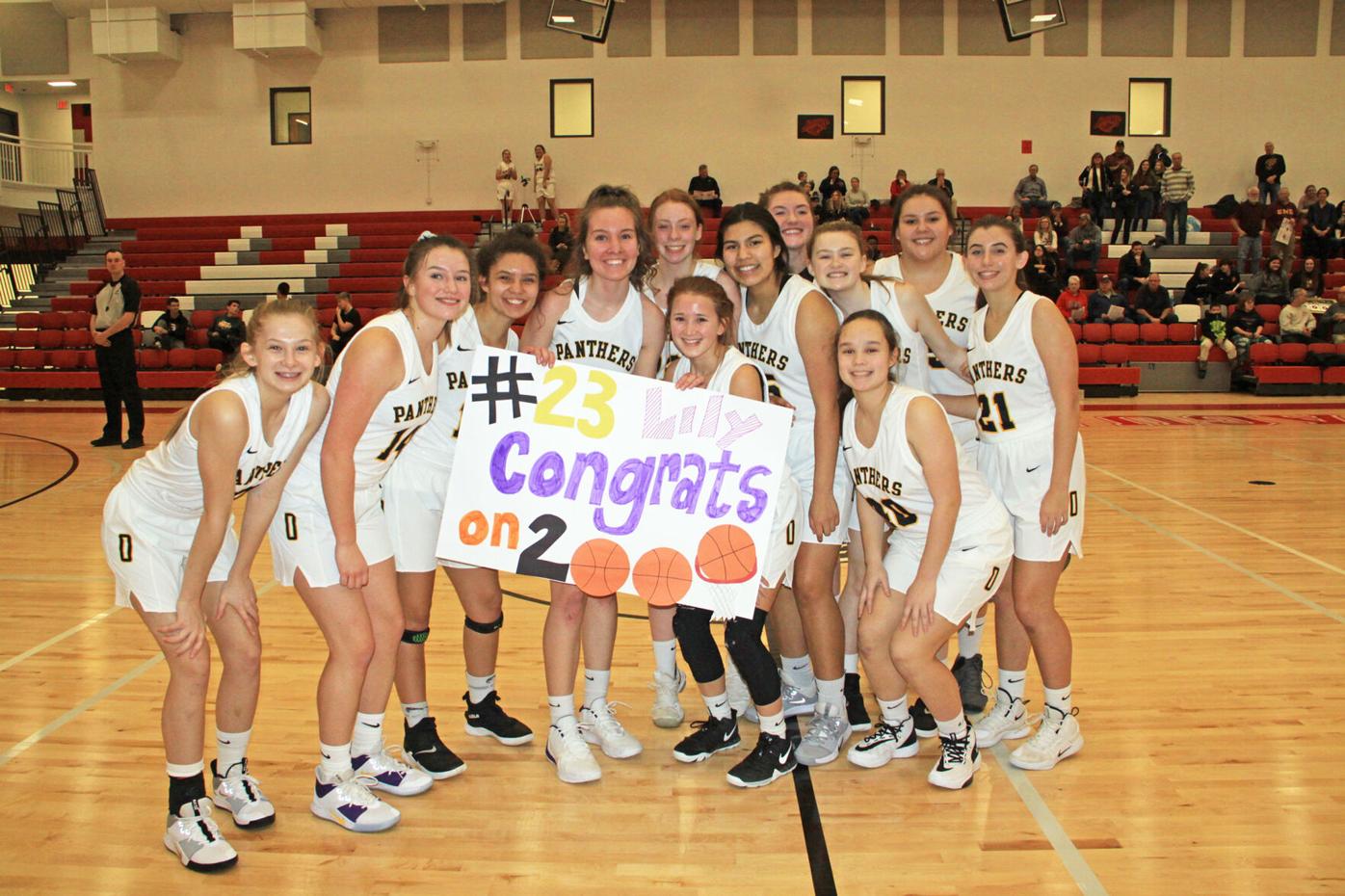 Life after high school. Onamia High grad and outstanding athlete Lily Orazem, recently signed a letter of intent to play basketball at the U of M at Crookston. 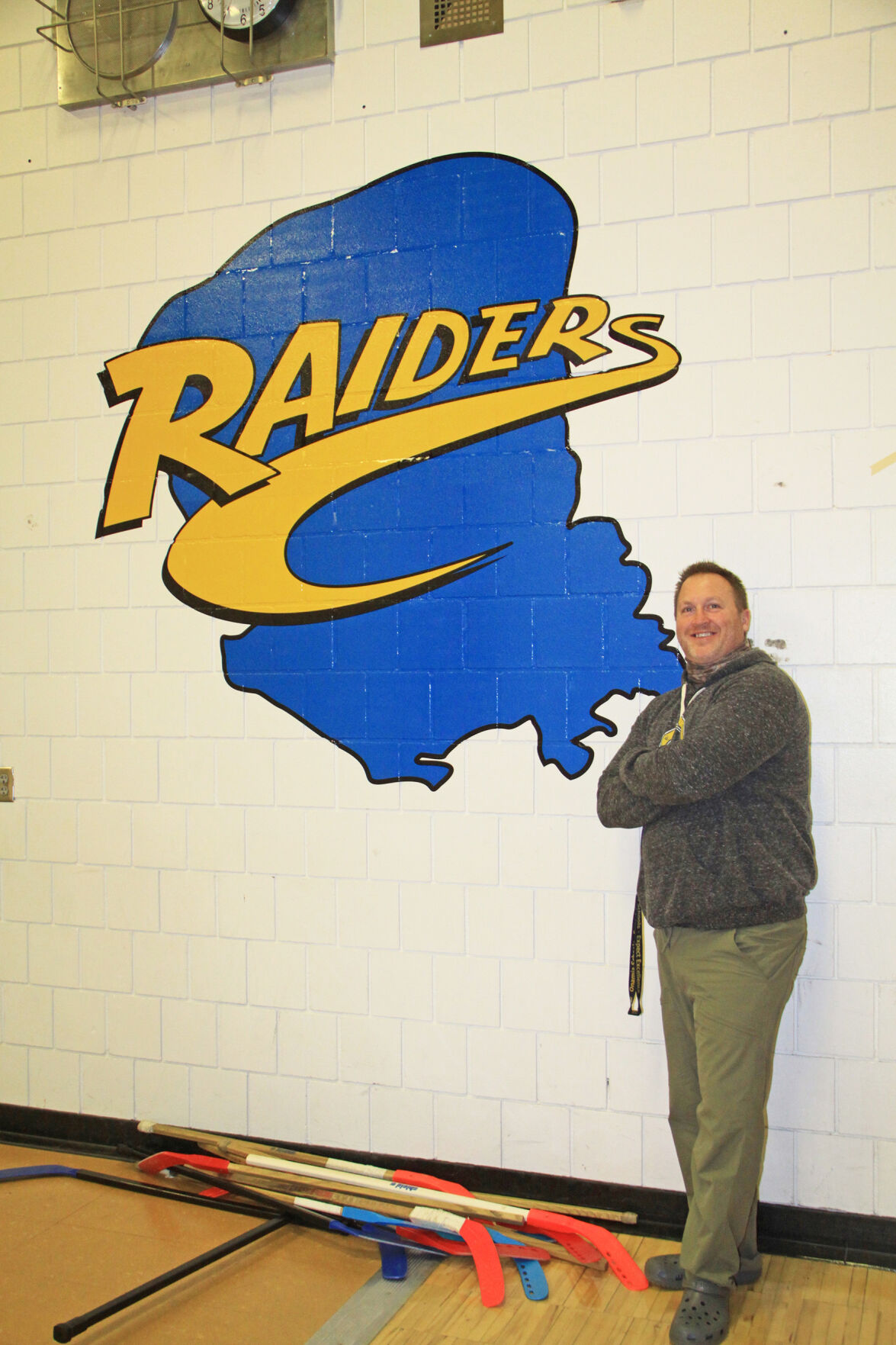 Onamia activities director Jason Leonard stood proudly beside new signage adorning the walls of the OHS gynasium. With the recent pairing of all sports programs with Isle, Onamia may be sticking with the Mille Lacs Raiders logo or changing to another: an issue to be decided by the two schools in the near future.

Life after high school. Onamia High grad and outstanding athlete Lily Orazem, recently signed a letter of intent to play basketball at the U of M at Crookston.

Onamia activities director Jason Leonard stood proudly beside new signage adorning the walls of the OHS gynasium. With the recent pairing of all sports programs with Isle, Onamia may be sticking with the Mille Lacs Raiders logo or changing to another: an issue to be decided by the two schools in the near future.

Onamia Public Schools Activities Director Jason Leonard recently displayed some new signage on the walls of the OHS gymnasium, including two placards containing the names of those Onamia High athletes since 1993 who played three sports during each of their six years in junior and senior high.

The “3-for-6” lists are conveniently posted on the wall at the entrance to the high school gym.

The OHS gym also sports two new large insignias adorning the west wall: a giant, orange “O” overlaid with the words Onamia Panthers and a large, blue drawing of Mille Lacs Lake with the word Raiders, signifying the teams from Onamia and Isle High which are paired and representing the big lake.

Leonard said the update on “3-for-6 participants was long overdue and will allow patrons to games to stop and view those special Onamia athletes.

• The combined won-loss record of the four boys and girls area high school basketball teams this season was 12-65, with four of those wins coming against each other.

The Onamia boys and girls basketball team’s combined record was 9-29 with three of those wins coming against Isle.

The Isle girls and boys basketball record was 3-35 of which one win was against Onamia.

The Mille Lacs Raiders wrestling team, a combined sport with Onamia and Isle High athletes, had enough young men to field a complete 14-person squad and found a way to win 16 matches, and many of their losses were against larger schools.

If Isle and Onamia schools tried going it alone in wrestling they would not have had the numbers to field a team or have won GRC championships over the years.

It may take several years to work its way out, but the fact that Isle and Onamia school districts recently voted to pair all their sports programs should, in the long run, allow all their teams to be more competitive in their conference and section.

• Speaking of being able to be more competitive with pairing, take for instance the results on the courts and fields of this past fall and winter sports.

Isle and Onamia both had trouble fielding enough varsity caliber players to man their 9-man squads.

In fact, Isle had to cancel two games because they did not have enough boys to fill the spots on their rosters.

And every parent, coach and AD at the public forums debating the pairing issues for the schools, supported the stance that it is not and has not been fair or even safe to throw eighth- and ninth-graders into action on varsity football teams.

Together, the two teams had two wins (0-6 for Isle) in football and the losses were by huge margins. Many times the scores were 40-0 by halftime and the second period was played with running time, or the opposing scores may have reached 100.

And even the boys on Onamia and Isle’s teams from this season and last, agreed that if they had been combined in 2019 and 2020 they might have vied for a section championship and possibly a trip to state.

• When the Onamia Panthers boys basketball team hosted the Sebeka Trojans on Feb. 2, the opposing coaches had something in common. Onamia’s Jason Runyan and Sebeka’s Jon Lillquist grew up and attended small schools just a few miles apart west of Brainerd: Runyan in Verndale and Lillquist in Sebeka.

Mille Lacs patrons of area high school sports may recall Lillquist teaching and coaching in the Isle school district in the late 1990s, where he took a girls team deep into section play.

He then moved on to his home town to teach and coach.

Runyan’s first and only teaching job has been at Onamia.

With the COVID-19-shortened basketball season scheduled this year, schools in many conferences were allowed just a few non-conference games, so when Runyan saw Sebeka had an open date, he jumped on it right away.

During the game staged at Onamia, one could hear some friendly bantering going on between the two head coaches because of the lack of crowds in the stands, mostly referring to the games they played against each other back in their high school days.

• There may be some in the Mille Lacs area who are too young to recall that in the 1950s, ’60s, ’70s and ’80s, the then Onamia Warriors boys basketball team played for not just one but two prizes each season: the Blue Ox game against Isle with the trophy being a small statuette of Babe the Blue Ox, and the Key Game, a contest with neighboring Crosier High School with the prize being the key to the city.

Both those games have since been discontinued, with the last Ox game being in 1993 and the final key game in the late ’80s when the Crosier Priory shut down its high school.

• It is sometimes said that people seem to die in groups of three. The Mille Lacs area lost three unique gentleman during this past January: men who each, in their own ways, left a legacy to their communities. The three were Bob Schmolke, Ross Kutil and Francis Croat.

Did these three men have their quirks? You bet they did. But those idiosyncrasies were the things that made them so interesting.

Schmolke was, by day, a local mail-carrier and, by avocation, an avid ricer on Lake Onamia and devoted spear-fisher. He sold lots of rice out of his home in downtown Onamia and had lots of stories of his exploits on the local lakes stabbing pike.

Kutil somehow found a way raise a family on farmland infested with rock west of Onamia. In “retirement,” he found work at Kathio State Park, and his avocation was carving things from buckthorn wood. Ross was always fun to talk to, served on many township boards and had a twinkle of mischief in his eyes.

And Croat loved old time music and was quite the story-teller. He was an immigrant to the lakes area but soon became a fixture among the white pines.

Those who lived around these men for any length of time can attest to each being a real character – in the good sense of the word.

And, on a personal note, those three (and their wives) produced quality boys and girls who did well as students of Onamia High and into their adult lives.

• Prior to the opening of the 2021 boys basketball season around Mille Lacs, a local coach heard a local reporter say, “You know, there is a possibility neither Isle nor Onamia will win a game this season,” wherein the coach responded with, “Oh yeah? They have to play each other!” And so they did with the Isle boys splitting the two games they played against Onamia and the Onamia Panthers girls team winning both games against Isle.

• In the Feb. 21 issue of the Sunday Minneapolis StarTribune, there were no fewer than three references to people with local ties to Isle or Onamia.

In an article on Minnesota lakes losing water clarity, there appears a picture of the hands of Onamia High alumnae Beth Holbrook, who is currently working with the DNR out of Brainerd as a biologist checking on water clarity and cisco populations across the Midwest.

Also, in an exposé on the demise of grocery stores in small towns across the state, there appeared no fewer than three pictures of Al Dahmen, along with his quotes and statements from Onamia mayor Marge Agnew which appeared in the StarTribune Business section. Mille Lacs locals may remember Dahmen as the store manager for Super Valu in Isle during years past. Dahmen eventually bought Pierz Foods in Pierz and was interviewed quite extensively as to the plight of many small-town grocery store owners and the industry in general.

• During the first week of March, the PGA and LPGA scheduled tournaments 30 miles apart in mid-Florida.

Just some food for thought!

Orazem has four years of eligibility to compete for the Golden Eagles after graduating high school in 2020.

Lily, currently a student at Central Lakes College in Brainerd, is among the Top 50 all-time scorers in Minnesota girl’s basketball history.

She was the Great River Conference MVP for the 2019-20 season, was a four-time All-Great River Conference selection who scored 2,595 career points and recorded 1,000 career rebounds. She holds six scoring and rebounding records at Onamia H.S and also lettered in volleyball and track at OHS.

She attended Central Lakes College for the 2020-21 school year but did not play basketball.

“Lily is a guard who can play multiple positions for us,” said head coach Mike Roysland of U of M Crookston. “Her big strength is her ability to create off of the bounce. Lily is a great kid who has a very high IQ. We are very excited to add her to our signing class.”

Orazem, the daughter of Bob and Lynn Orazem of Onamia, plans to major in elementary education at UMC.

She has four younger siblings Brook, Anne, Bo, and Luke.