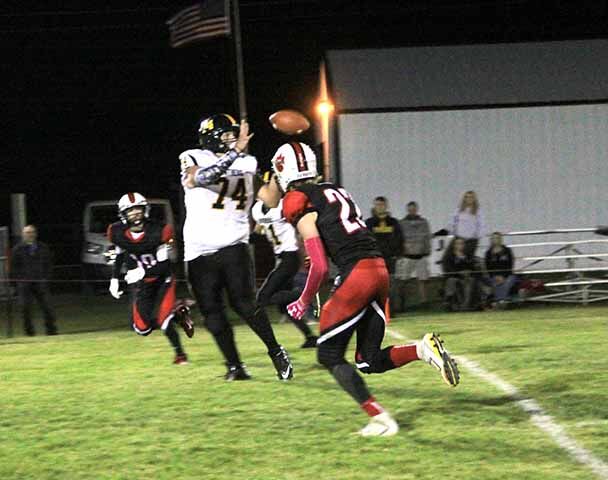 Onamia offensive lineman Trysten Benton (74) caught a screen pass over the middle setting up the Panthers second touchdown against Isle. 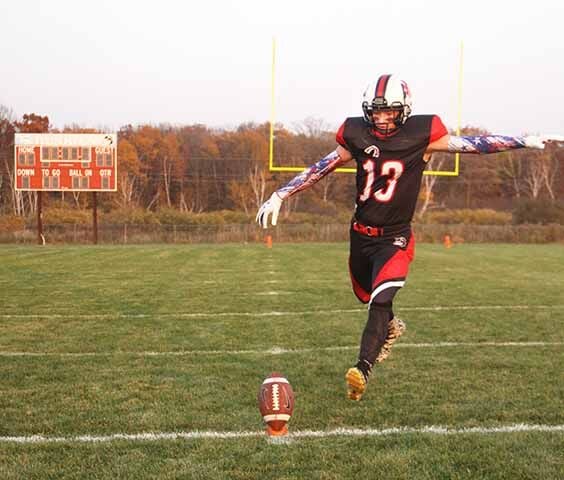 Kicking off the season

Isle junior Daniel Miller handled the kickoff duties for the Huskies in the opening game of the season against Onamia High on Oct. 9.

Onamia offensive lineman Trysten Benton (74) caught a screen pass over the middle setting up the Panthers second touchdown against Isle.

Kicking off the season

Isle junior Daniel Miller handled the kickoff duties for the Huskies in the opening game of the season against Onamia High on Oct. 9.

When the Minnesota State High School League decided a few weeks ago to allow a modified high school football season of six game, instead of the usual eight, due to issues surrounding the COVID-19 pandemic, the cross-county rivals Onamia Panthers and Isle Huskies found themselves scheduled to play each other in the opening tilt at Isle on Oct. 9.

Onamia entered the contest with a 1-35 record over the past four seasons, and four of those losses were to Isle by a total of 202-26 points.

But, one Isle coach, just prior to the game, pulled out the old cliché, “you can throw out the record books when our two schools meet.” The coach had reason to make that prediction, considering how, on paper, the teams looked similarly matched.

Each school was suiting up just 13 or 14 players for their 9-man squads, and each team had a handful of seniors to showcase, including experienced quarterbacks in Teagen Haggberg for Isle and Noah Rohloff for Onamia.

As it turned out, the night (which was Homecoming for the Huskies) belonged to the Panthers, who took a 22-8 lead into halftime, and went home with a 38-16 win.

Onamia took an 8-0 lead after the first quarter, scoring in two plays on their third series highlighted by a 43-yard touchdown run by senior Brady Husom.

Isle’s first two series ended with one play each: fumbling the ball away, recovered by Husom, and an interception by Onamia’s AJ Drift.

Isle was dealt a blow late in the second quarter when their top runner, Eric (Turk) Paulsen, was forced to leave the game with a leg injury. Later in the game, Isle had another player go down to injury, leaving them with a limited number of players.

Onamia built the score to 14-0 seconds after the injury to Paulsen, using an over-the-middle screen pass to tackle Trysten Benton, who rumbled 39 yards from mid-field to the 11 yard-line, before Drift ran it in to the end zone.

Isle momentarily changed the momentum with a 42-yard scoring pass to senior Willy Stalker with just one minute remaining until halftime.

But, Onamia countered 29 seconds later with a 47-yard scoring pass to Husom that put the Panthers up 22-8 by intermission.

The only scoring of the third period came following a 13-play touchdown drive which included 10 rushes by Panther senior Kayden Eagle.

The squads traded interceptions early in the final period, and both teams scored one more time: first by Onamia on an 8-play drive of 52 yards, all on the ground, to go up 38-8.

On the ensuing kickoff, Haggberg returned the ball 65 yards to the end zone for Isle’s final score.

Onamia finished the game with a total of 368 yards, including 243 on the ground, with 126 yards turned in by Eagle and 104 yards from Husom. The Panthers had 125 yards through the air.

Isle produced 224 total yards of offense with 122 on the ground and 102 through the pass and with three catches for 59 yards and a touchdown from Stalker.

Haggberg was 7-22 in passing, including three interceptions, while Rohloff was 6-12 with one intercepted.

Each team had the ball 11 times. Onamia’s series ended in four punts, five touchdowns, an interception and one turned over on downs.

Isle punted three times, fumbled the ball away once, had three possessions halted by interception, two turned over on downs and scored two touchdowns.