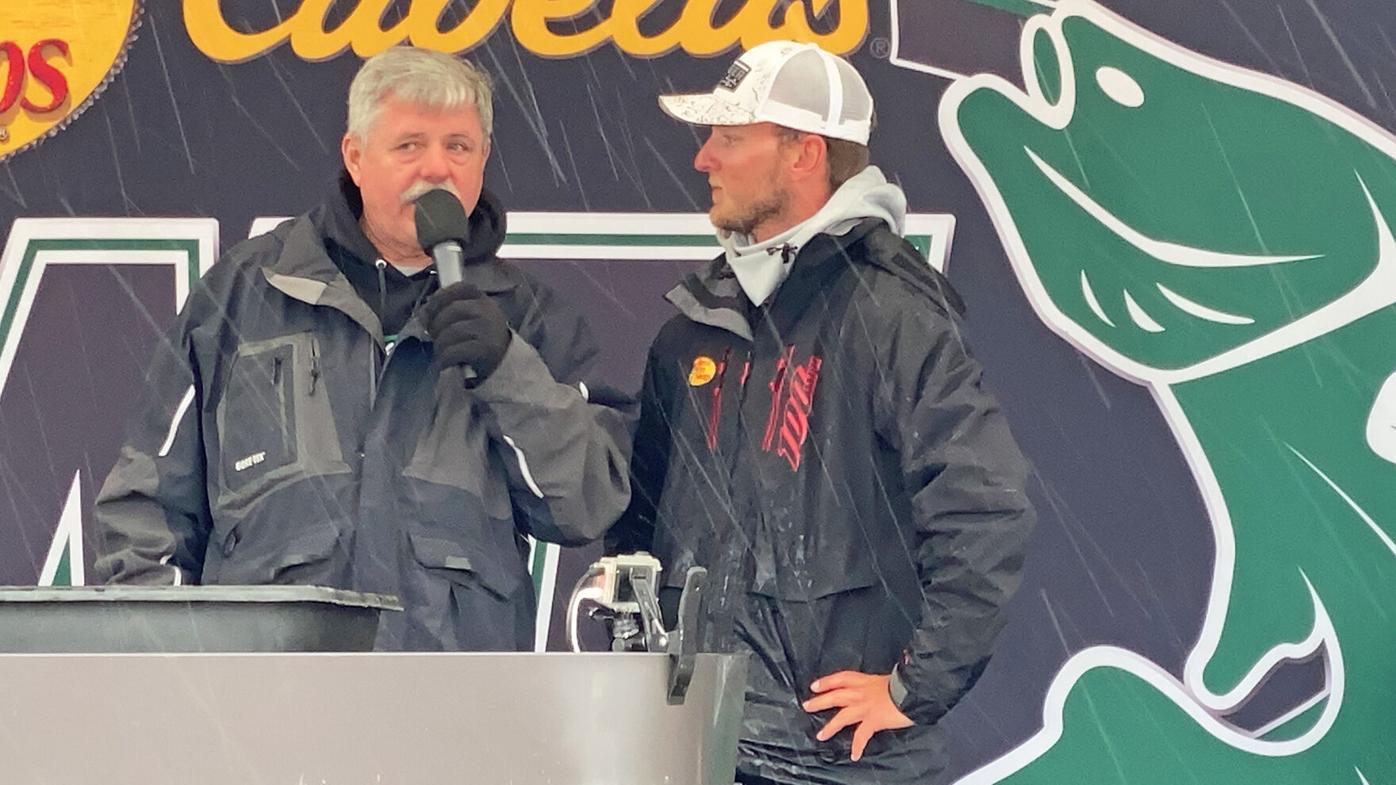 Eric McQuoid on the podium with the National Walleye Tournament director  Anthony Wright at the Sturgeon Bay event earlier this year. Eric said it’s not a money making career but definitely one of the most fun jobs out there. 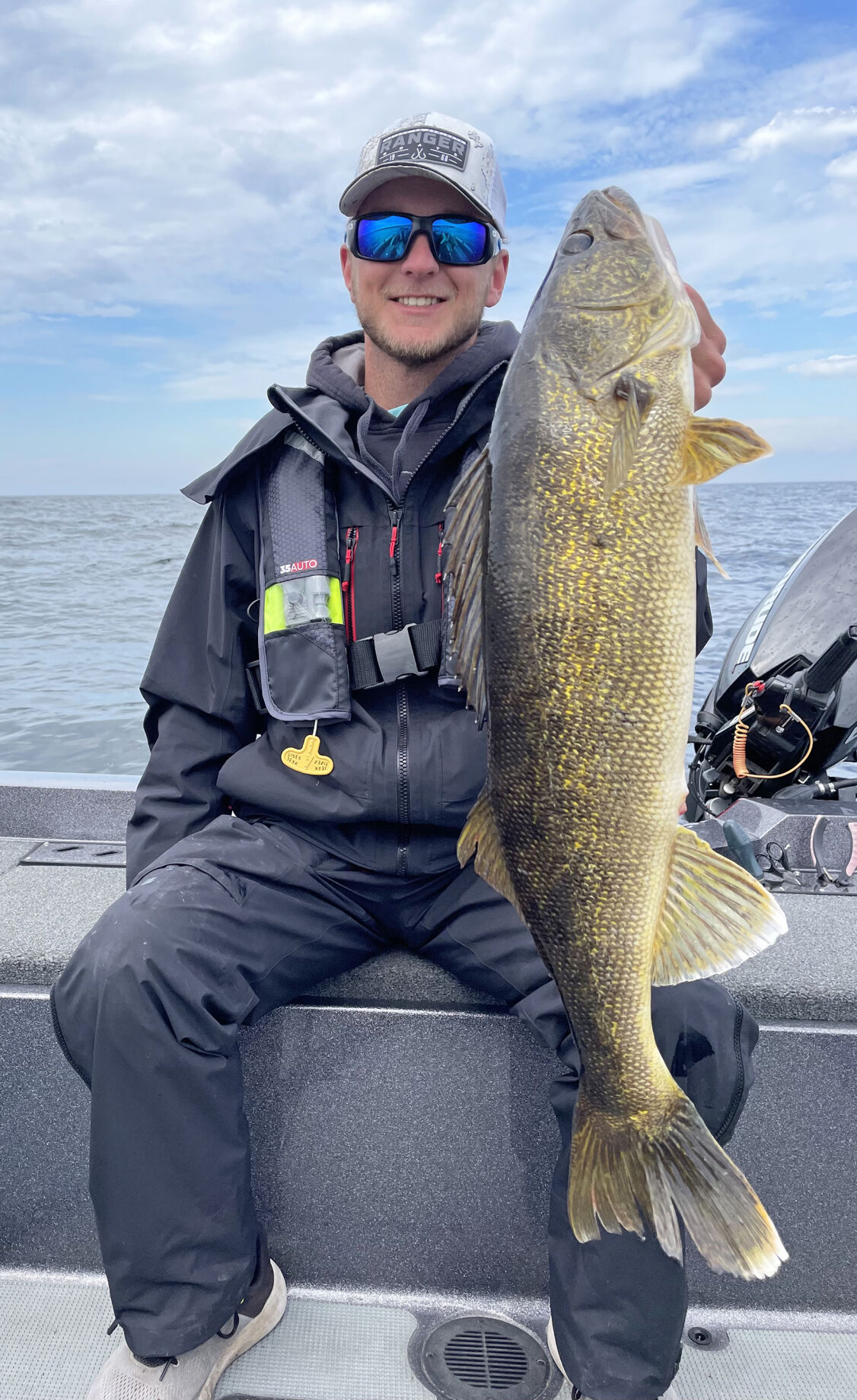 Eric with a giant Sturgeon Bay walleye caught while pre-fishing for the event.

Eric McQuoid on the podium with the National Walleye Tournament director  Anthony Wright at the Sturgeon Bay event earlier this year. Eric said it’s not a money making career but definitely one of the most fun jobs out there.

Eric with a giant Sturgeon Bay walleye caught while pre-fishing for the event.

If you’re not familiar with the storied McQuoid name around Mille Lacs, do a quick google search of McQuoid fishing and a number of names come up: Terry, the patriarch, and creator of McQuoid’s Inn located just North of Isle; Kevin and his wife Karen, owners of Mac’s Twin Bay Resort; and their son, Eric, who has become the third generation McQuoid to become a professional fisherman. They are pro fishing’s first family of Mille Lacs.

When it comes to what they fish for, it doesn’t seem to matter what species you mention. The McQuoids have caught them all but are most known for their walleye fishing prowess.

Eric was raised on fishing from a very young age and already has a lifetime of angling experience at the age of 21. This season is his pro division debut on the major walleye tournament circuits. Oh, and not to mention, he’s also currently a junior at Bemidji State University where he’s working on a double Business major.

I caught up with Eric recently and got a chance to chat with him. Here is what he had to say:

What are you up to currently Eric, like this week?

This week we are fishing the Anglers Insight Marketing (AIM) Quest for the Best on Thursday and Friday, and on Sunday, I am doing the AIM weekend walleye series on Mille Lacs.

How is Bemidji State University? Are you finding time to fish up there?

I am currently going into my junior year at BSU. I love the area up there between the different lakes to fish, whether it’s walleyes or bass there are plenty of options there.

Are you fishing or preparing to fish for a tournament anytime soon?

After this weekend, the next one I will leave for on Thursday, June 17 and head to Huron, Ohio for stop number three of the National Walleye Tour (NWT). After that, the schedule for the rest of the season is a NWT on June 24 and 25 in Huron, Ohio. AIM Quest for the Best on July 15 and 16 in Marinette, WI. The NWT on July 29 and 30 in Mobridge, SD. And finally, the NWT championship on Ottertail Lake in Ottertail, Minn. The championship is open to only the top 40 anglers from the regular season. Currently I am sitting in 21st place after 2 events for angler of the year.

That’s a nice spot to be in, congratulations! What are the two tournaments have you fished this year?

So far this year I have competed in two NWT events in Chamberlain, SD and Sturgeon Bay, WI. I finished those events in 40th and 43rd respectively.

Is it your long range goal to be a pro fisherman?

My goal as of right now is to finish up my two business degrees in college, continue my guide service and fishing career. Right now, I am only guiding on Mille Lacs, but I am looking into guiding in the Bemidji area as well.

You started out as a “co-angler’’ fishing in the boat with a “pro.” Now that you are in the pro division, there must be a big difference between the two. Can you tell me the up’s and downs of being a “co” versus a “pro?”

This is my first year as a pro angler; it is a noticeably big change in the thought process going on. As a pro, you must make all the decisions in the boat, anything from where to go, what to use, what size fish to keep and when to leave.When I was a co-angler, I didn’t have to make those decisions, and it wasn’t as much stress on your shoulders. You went with what your pro said, no questions asked. Some days that was tough to do, but some were awesome. My favorite part about being a co-angler was being able to fish in the boat with some of the best walleye anglers in the nation and learn all the different tricks and tactics that they have. I highly suggest fishing the co-angler side if anyone is interested in it.

You and your dad, Kevin, have been fishing tournaments together for a long time. Can you describe what that’s like and the dynamics in the boat as far as picking fishing tactics, baits, colors, speeds, and locations?

My dad and I have fished the Masters Walleye Circuit (MWC) tournaments since I was 15 years old. Growing up, and being in the boat with dad, I have always learned a lot very fast. From decision making in the boat, keeping your head down and grinding it out on tough days, when to hit scramble mode and hit as many spots as possible looking for an active fish, and to just have fun fishing. This career isn’t a money maker, but it is one of the most fun careers I think is out there. Usually, my dad would always drive the boat; this weekend for the AIM, I am the captain, and he is riding along. After fishing for so long together we have built a very compatible chemistry in the boat. No matter whether we are trolling 6 planer boards in Wisconsin or lindy rigging Mille Lacs, we know what the other is going to do and how we will accomplish our day.

That sounds like a special bond. I know your dad and mom (Karen) fished many successful tournaments together, is your mom still involved in any tournament fishing, and have you fished any tournaments with her?

Mom and Dad fished tournaments together for a lot of years and were highly successful. I have not fished any tournaments with her yet, but we have been talking about jumping into a few local ones together and keeping the tradition going.

What was it like fishing your first tournament with your dad as the co-angler, and where was it?

My first time fishing the co-angler side was in Sturgeon Bay, WI in 2016. It was a tough bite that year, day one we traveled about 40 miles into 4 foot waves and only brought two fish in for 12 pounds. Day two was flat calm and sunny and we didn’t find any walleyes that day.

What was it like fishing your first tournament on your own as a pro, and where was that at?

My first tournament as a pro was on Lake Francis Case in Chamberlain, South Dakota. The bite was phenomenal out there. For the week of pre fishing we caught between 20-40 walleyes a day. Most were between 14-18”.

That sounds like some great fishing, can you give me some highlights of your tournament finishes so far?

So far in my career I have fished around 50 tournaments and have been in the top ten finishers ten times. My favorite day so far was on Green Bay a few years ago. Dad and I were pulling spinners and brought in 36 pounds for 5 walleyes on day 2 to jump us into 4th place for the event.

That is another incredible day of angling in the life of the McQuoids and wrapped up our interview. I want to thank Eric for taking the time out of his busy schedule to visit with me. If you’re interested in fishing with Eric, give him a call or text at 320-630-3505.